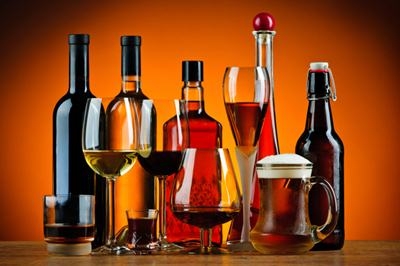 Bottles and glasses of alcohol drinks |

Indore: Local crime branch police arrested liquor contractor, who was on the run for two years in connection with Rs 41-crore excise revenue scam, from Lucknow. He was brought to city on Friday. He was hiding in Gonda, Kanpur, Bhopal, Balwada, Khandwa and Lucknow to stay out of police reach. His petrol pump employees were sending him money while he was on the run.

Additional Superintendent of Police (crime) Amarendra Singh said more than a dozen liquor contractors were booked by Raoji Bazaar police in this connection. The liquor contractors had allegedly embezzled Rs 41 crore, an amount they were to pay to state excise department. Accused Vijay Kumar Shrivastav, a resident of Apollo DB City, was on the run from 2017 after the case was registered against him and other contractors.

Police had arrested 11 accused earlier. Shrivastav was staying in a rented accommodation in Gomti Nagar in Lucknow for last few months to evade arrest. The police had announced a reward of Rs 20,000 on his arrest. After a tip-off, a team was sent to Lucknow from where the accused was arrested on Thursday. Shrivastav hails from Gonda (UP) and was staying in the city for a few years. He was a liquor contractor and is also owner of a petrol pump in Balwada (Khandwa district).

He did BCom from Navabganj, Faizabad University. He started job as an executive at Kedia Distillery in Ghatabillod, Dhar, a few years ago through one of his father’s acquaintances. In 1992, he was transferred to Bhilai by the company. He then lived in Bilaspur after wedding and was employed in warehouse of Som distillery as a manager.

In 2005, Shrivastav moved to Indore and started working for liquor contractor Manjeet Singh (Bilaspur). Manjeet closed his business in Indore and moved to Bilaspur in 2012. Since then, Shrivastav  was working as liquor contractor in the city. He received license of liquor shop of Devguradiya for 2012-13. Later, he took up liquor shop in Kanchanbag and Chhoti Gwaltoli from 2014 to 2017.

He owed Rs 7.21 crore to state excise department but he allegedly transferred the shop to Avinash Mandloi. Police said Shrivastav did not pay revenue to excise department and he managed to renew license of his two liquor shops at MG Road through manipulation in 2017-2018.

Meanwhile, the accused told police that he has no dues and was implicated in false case. The accused was handed over to Raoji Bazaar police station staff and the police are investigating the matter further. Another accused Rahul Chouksey is still on the run.