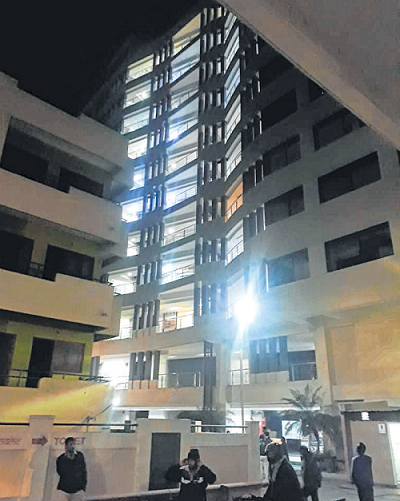 The incident took place in Shekhar Central commercial building between 9.30 and 9.45 pm. The deceased, identified as Vaishali Gour, was a resident of 15th Battalion area of the city. She was seen on the fifth floor by one of the guards, so it is believed that she fell from the same floor. It is still not cleared whether she jumped from the height or accidentally from the building.

CSP (Sanyogitaganj) Jyoti Umath along with forensic officials reached the spot and began investigation. The incident was captured in a CCTV installed there but it could not record whether she fell accidentally or jumped from the height.
Preliminary investigation revealed that Vaishali was a sales girl in a firm, Pankh Sales in C-21 Mall and usually got off from work around 7 pm.

On Thursday, she got off at around 5 pm from her office and after which she reached Shekhar Central building. She was on the fifth floor around 9.30 pm. The guards were having tea on the ground floor when she fell there. They shocked to see the girl and informed the police.

Sources claimed that she had an argument with two persons in C-21 Mall over some issues in the evening. Police are collecting information about those persons also. Her cousin Vikas Gour said that Vaishali hailed from Sehori area in Morena district and was staying with her uncle Udayraj Singh Kushwah, who is a police officer and posted in Barwani district. Her younger brother Raman is a class VI student and is staying in a hostel in Bhopal.

It is still not established whether she jumped from the building or she accidentally fell from there. The CCTVs installed on the fifth floor are being examined to know about the incident. Moreover, the statements of her family members are also being taken by the police,” Umath said.