Indore Gets Teen-Edge In Swachhta! 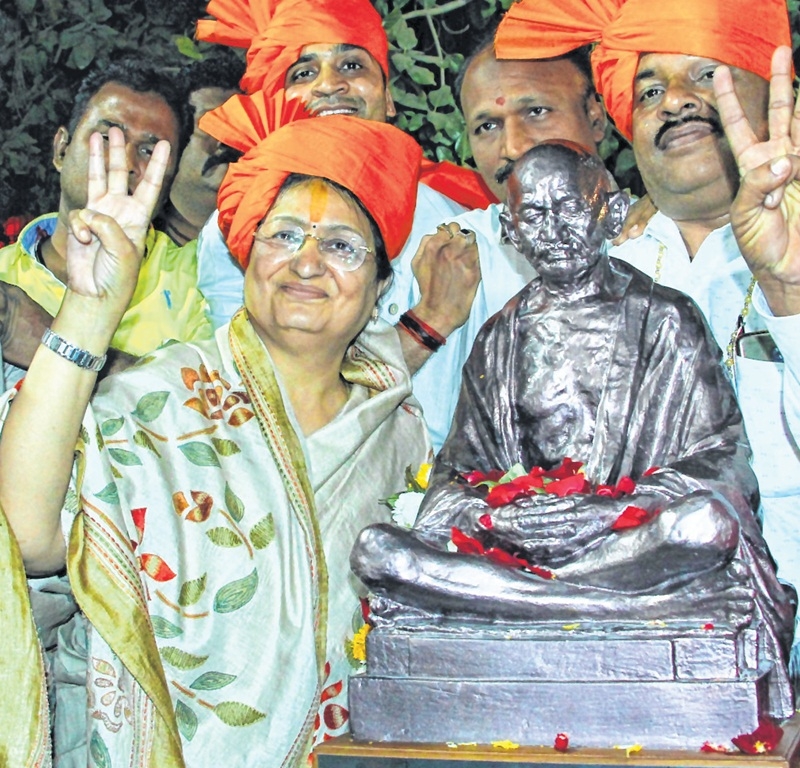 Indore: When campaign for setting up compost units was undertaken on war-footing and Indore Municipal Corporation (IMC) cleaned the trenching ground of legacy waste within months, residents knew that it’s just a matter of time before city pulls of a hat trick for being country’s cleanest city.

On Wednesday, city broke into celebrations when it was adjudged as India’s cleanest city for third time in a row. “It is because of the sheer dedication of Indoreans, hard work of IMC officials and sanitation workers that we made a hat trick,” said an elated mayor Malini Gaud.

She said there was no doubt in her mind that the efforts put in by the city in enhancing the cleanliness level would pay off. Municipal commissioner Asheesh Singh also dedicated the achievement to the IMC team and public participation in maintain cleanliness and taking the hygiene to next level.

“People of Indore responded very promptly to initiatives of IMC for enhancing cleanliness level. Besides, IMC officials and sanitation workers did a remarkable job in removing legacy waste from trenching ground in Devguradia,” he said.

2017 Launch of door-to-door garbage collection, dust-free roads and garbage bin-free city helped Indore to win cleanest city tag.
2018 Segregation of waste at source helped it to retain the tag.
2019 Disposal of wet waste at source, 3R initiative and removal of 15 lakh tonnes of waste from trenching ground to become a landfill-free city are steps, which put Indore ahead of other cities. Getting rid of 15 lakh tonnes of waste in six months was something that made national headlines.

After plant’s success, IMC decided to establish a more decentralised plant. Thereafter, IMC has installed 15 TPD capacity bio-methanation plant on EPC model at Kabitkhedi for processing of wet waste to generate clean energy to use in public transport and has started establishment of 50 TPD capacity bio-methanation plant on public-private partnership model. This will lead to running of all 100 CNG buses of public transport through bio-CNG generated from MSW by December 2019. 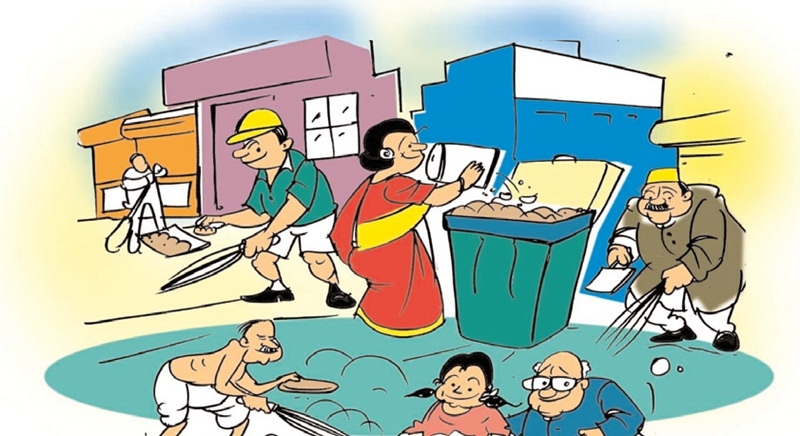 IMC adopted state of the art technology Reverse Vending Machines for in-situ conversion of plastic bottles to flakes. The machine can crush 90-120 bottles per hour. It can handle bottles up to the size of 2000 ml. It can store flakes up to 10 or 500 bottles of different sizes. The machine has been installed at 10 different public places in the city. This innovative idea was adopted to reduce plastic bottle waste at public places and also reduce transportation cost of bottles, if they are collected and transported to recycling units. To encourage the use of public transportation and to create awareness among citizens, the disposal of plastic bottles through Reverse Vending Machines, a unique concept of incentivisation was included under this intervention. The users can get an incentive of Rs 5/- per bottle as cash back through Paytm or Rs 5-discount coupon to be used in public transport buses both within city and inter-city. To further promote usage of plastic vending machines, IMC has planned to introduce SWACHH CARD, which is linked to 1500 shops of Indore, where the user can redeem the obtained points to get the benefit.

Ahilya Bai Holkar Fruit and Vegetable Mandi (also known as Choithram Mandi) generates 20 TPD of organic waste. IMC incurred cost of Rs 3 crore per annum in transferring the waste generated at Choithram Mandi to the centralised organic waste processing plant at Devguradia. It was projected that this transportation cost would increase up to Rs 7.2 crore per year in next five years. Therefore, to reduce the transportation cost and processing cost, IMC developed an ultra-modern bio-methanation processing plant to generate bio-CNG and compost on VGF model in partnership with Mahindra Waste to Energy Solutions Ltd on a PPP model. The plant uses 20 MT per day of fruit and vegetable waste generated from mandi and converts it into bio-CNG, compost and electricity from bio-CNG for captive purpose. For the first time in country, indigenous biogas cleaning and separation unit was established to purify methane up to a purity level of 95%. Purified methane is compressed at 210 bar pressure and filled into cylinders and about 1000 kgs of bio-CNG is generated daily and dispensed in city buses.

ISCDL signed an agreement with AiCTSL and as per the provisions of this agreement, the company produces bio-CNG and supplies it at a subsidized rate of Rs 53/kg as against the market rates of Rs 63/Kg. This project is a uniquely successful PPP model that helped IMC to reduce transportation cost of municipal solid waste and generate green fuel used in public transportation, which leads to reduction in carbon foot-print. This plant is operational for last one year. 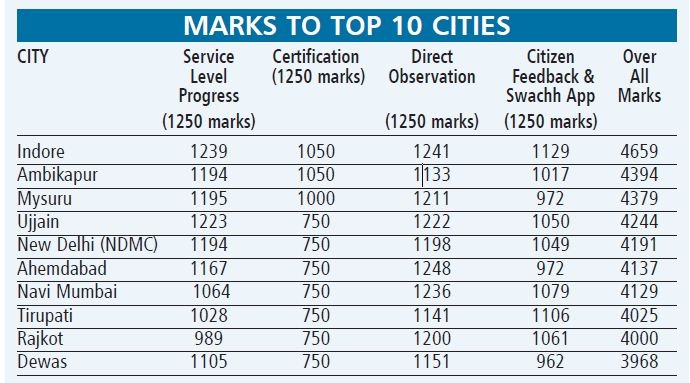 IMC presents a platform for its citizens to actively participate in making Indore a clean City. They seek citizens’ engagement with a focus on highlighting the responses on innovative solutions for improved livability and governance.

IMC staffer carry out twice a day sweeping in 100% commercial areas of the city and activity log for sweeping is being tracked by the sanitary inspectors. All the commercial areas have an appropriate numbers of twin-bins installed, which are emptied daily. Every garbage collection vehicle within the city is being tracked by GPS/RFID, which helps in locating the movement of the garbage collector.

Parameter-2: Direct Observation (1241/1250 marks)
The city’s residential and commercial areas were found to be 100% clean. 100% of the community and public toilets surveyed were found to be clean, well lit, well ventilated, had electricity connection and had water supply/ flush.

Indore is one of the cities where will all CTs/PTs have onsite safe disposal system ie either having a septic tank with no overflow or sewer network with no open drainage. The catchment area of the city’s airport/railway station/bus terminals were found to be 100% clean.

Indore is also one of the three ‘5 Star’ rated cities under Star Rating of Garbage Free City certification program of theMoHUA, in the country.

Parameter-4: Citizen Feedback & Swachh App (1129/1250 marks)
In the case of Indore, findings of the DO, SLP and Citizen Feedback were found to be in sync. Over 99% of citizens say that they were aware that their city is participating in Swachh Survekshan 2019 and were satisfied with the cleanliness levels of the city. Around 99% of citizens said that toilets/urinals are accessible and clean now. 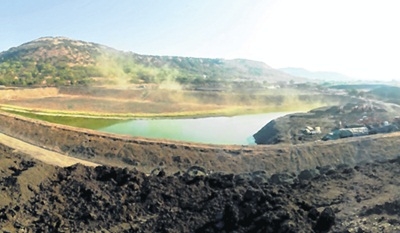 Indore was awarded ‘5 Star’ raking under Star Rating of Garbage Free City certification programme of the Ministry of Housing and Urban Administration, in the country. It shares status with Ambikapur and Mysuru.

Indore has applied for seven-star but no city could meet parameters for that. The seven star rating was for 900 or 1000 marks but Indore got 800 marks and settled with 800 marks. The IMC also received certificate for Innovation and Best Practices in Waste Management.