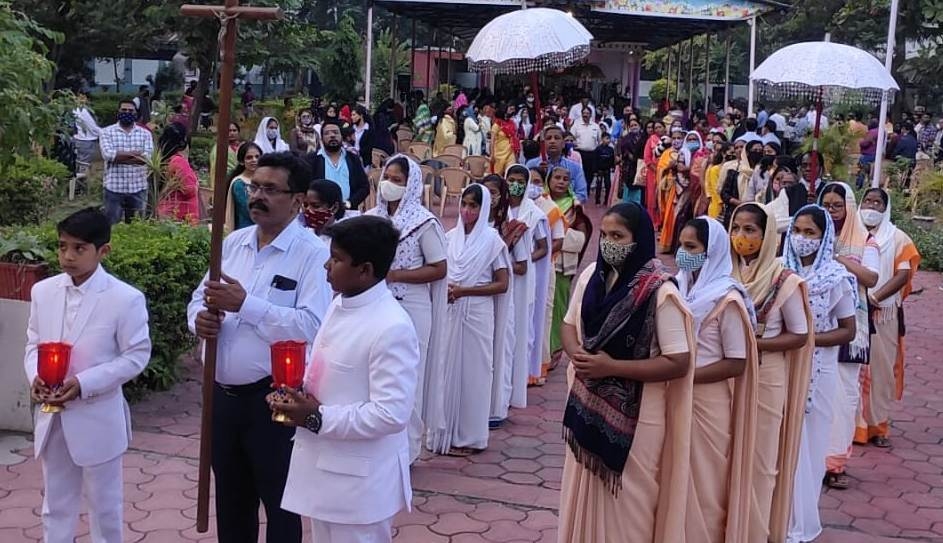 Procession taken out of Mata Maria Grotto Palasiya on Sunday |

The universal Catholic Church celebrated the feast of Christ the King on Sunday, in Indore. The celebrations were held in the Red Church as well as all other Catholic churches.

Community members in honour of Christ the king conducted the Holy Mass. This was followed by a short procession around the church.

In Red Church Indore, on this auspicious occasion Fr Sibi joseph and Fr John Bosco were felicitated on the silver jubilee of their priestly ordination. They were felicitated by Father Suresh Somani and Neelu Sebastian respectively

In his discourse, Bishop Chacko of Indore Diocese said, “In 1925, Pope Pius XI introduced the celebration of Christ the King in the Catholic Church.”

He added that Jesus Christ was, is, and will be the King who resides in heart of Catholics. He was not a worldly king, if his kingdom was of this world, he would have been born in a palace instead of a cowshed,” Chacko said.

He added that Christ’s entry into the city of Jerusalem would not have been on a donkey, but on a horse, and he would not have died suffering on a cross in the luxurious bedroom of a palace. “Even today, he rules our hearts, when we follow his teachings, love him and consider him our guru and king,” Chacko said.

The information was shared by Fr Babu Joseph and BA Alvares on behalf of the Indore Christian media forum.