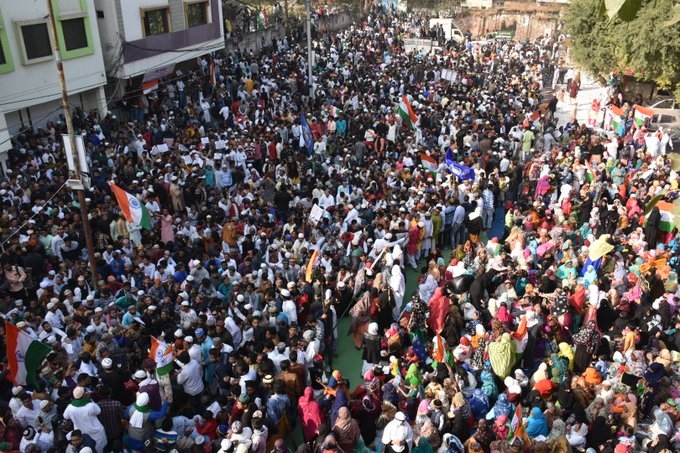 Indore: An additional superintendent of police and a station house officer have been line-attached in the wake of lathi-charge against those protesting against Citizenship Amendment Act (CAA) at Barwali Chowki late on Thursday night.

DIG Ruchi Vardhan Mishra confirmed that ASP G P Parashar and Sarafa TI RN Bhadauria have been line attatched. "The district magistrate has ordered an inquiry and both will remain line attached till the completion of the inquiry," the DIG said.

Later in the night, ASP Gp Parashar has been attached to police headquarters in Bhopal.

The ongoing protests against CAA had been going on for the past two days at Barwali Chowki, but it boiled over late on Thursday night when the police lathi-charged the protestors to disperse them. The police action has further angered the protesters and there was a major demonstration against CAA at Jama Masjid ground on Friday afternoon, which is still going on till filing of the report.

As a precaution, heavy police force has been placed in the area. The protestors too have dug in their heels and are demanding an explanation for the lathi-charge.

The impact of the protest has reached Bhopal and CM Kamal Nath sent Congress party media cell incharge Shobha Oza as his representative to talk to the protestors and persuade them to end their strike.

“The government won’t allow such a law to be enforced in the state. CM Kamal Nath himself is against the CAA and NRC. Also, I want all the protestors to end their strike and maintain peace in the city,” Shobha Oza told the protestors. She also promised that the government would institute an inquiry.