Indore: 3 arrested ​for ​carrying liquor worth Rs ​3L in car

14 cartons of liquor recovered from the car, one of the accused fled from the spot
Staff Reporter 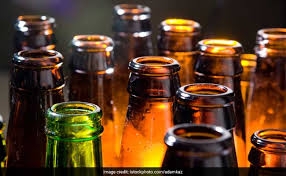 Police on Friday arrested three persons while they were carrying liquor in a car in Chandan Nagar area. Police recovered country made liquor worth Rs 3 lakh from the accused. ​A youth managed to flee from the spot during the police action.

According to ASP Dr Prashant Choubey, on the instruction of senior officials, a team of Chandan Nagar police station was constituted to gather details about the bootleggers and the illegal liquor suppliers.

Acting on a tip-off, the police station in charge alerted the team about a car carrying liquor illegally on Friday morning.

The team ​spotted the car in Sahyog Nagar area ​and stopped​ it​. Four men were in the car and they tried to flee from the spot. However, the police caught three men while one of their accomplices managed to flee.

The police checked the car and recovered 14 cartons containing country made liquor from it. The accused were later taken to the police station.

The accused were identified as Deepak Chouhan, Ravi Makwana and Harish Pawar of Chandan Nagar area. Police said that the liquor recovered from the accused is worth Rs 3 lakh. Further investigations is underway into the case.