Diya gets special care after last debacle killed its cubs 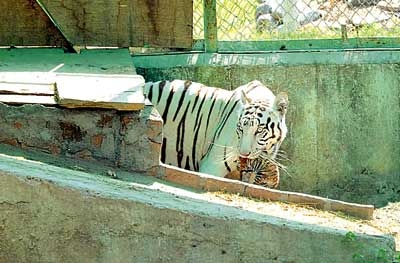 Indore :  After the recent good news from the Kamla Nehru Prani Sanghralaya (City Zoo), the officials have now diverted their energies on taking care of the new mother, the white tigress Diya.

Notably, Diya is the same white tigress, who allegedly mishandled her new born last time, close to a year ago. The incident had then killed three of the four cubs born to the couple.

The tigress caught the cubs from their necks, puncturing the vital organs of their body and causing their death.

Out of the four, only one could survive. The one survived was named as ‘Lucky’ by the zoo officials.

Meanwhile, the new born are said to be fine as their growls seem pleasing to the zoo staffers. The cubs are born to white tigress Diya and Royal Bengal tiger ‘B1’. The behavior of the tigress is quite changed from what it was the first time, zoo keepers claim.

A senior zoo official said, upon listening to sound of cubs, they seem to be four in number. The tigress has not allowed anyone to reach close to her.

“We haven’t even attempted to go near the enclosure where Diya has kept them. In-fact, avoiding risk, we’d want the cubs to come of the enclosure on their own,” he added.

Zoo In-charge Dr Uttam Yadav told Free Press, “The staffers are making it sure that the visitors, by any means, don’t disturb Diya or B1. They should remain calm and be with the cubs for a few weeks. This would develop a bond among the parents and cubs.”