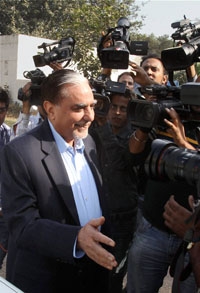 New Delhi: Zee Group Chairman Subhash Chandra and his son were on Saturday questioned for over seven hours by Delhi Police which confronted them with two arrested Editors in connection with the alleged Rs 100 crore extortion bid from Congress MP Naveen Jindal’s company.

Chandra arrived at the Crime Branch office in Chanakyapuri at 2 pm while son Puneet Goenka reached there at 2:30 pm along with their lawyers. The questioning went on till late in the night.

Chandra’s questioning came following police sending three notices to him asking him to join investigations in the case in which Chaudhury and Ahluwalia were arrested late last month following investigations into com-plaint filed on October two.