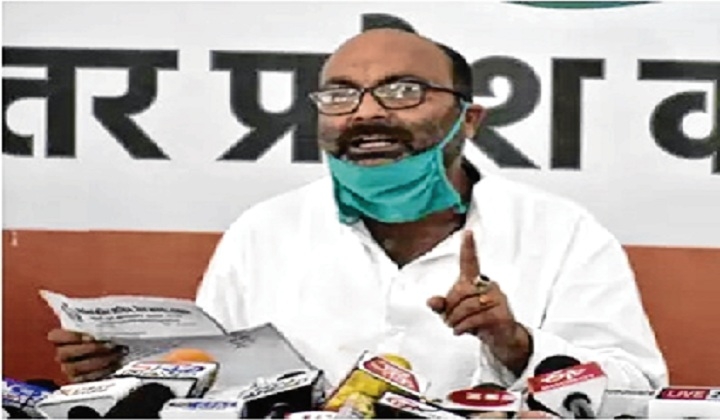 Stepping up its attack on the Yogi Adityanath-led dispensation, the Congress on Sunday alleged the UP government was indulging in fraud and deceit by claiming a whopping 1.25 crore jobs.

Dubbing the UP government’s claim of providing more than a crore jobs as falsehood, Congress UP ch­i­ef Ajay Kumar Lallu alleged, “The unemployed persons are committing suicide in UP, but the state government is busy in self glorification.”

Lallu said the BJP had promised to provide 2 crore jobs every year. What happened to that promise?

He said the unemployment rate is the highest in the last 45 years. We are not saying this, but it has been revealed by the government figures. The unemployed youth are being cane charged for demanding jobs.

Lallu alleged the state government was even taking credit of providing jobs to such people, who have been engaged in traditional professions for generations now. The people will never forgive such trickery and deception.

He said the corona pandemic has brought about economic disaster. All the major indigenous industries in the state, including glassware, brassware, carpet, weaving, furniture, leather, hosiery, dairy, pottery, fishery-hatchery have been grossly impacted. Millions of weavers are in a pitiable condition, yet there is no government support for them.

He lamented although the state government was making tall claims, the ground reality is entirely different. The people are forced to take the extreme step every day owing to their financial misery in the state.

Citing an incident, Lallu said a migrant labourer, who had returned from Surat to village Amlohra of Bisanda area in Banda district, killed himself on Friday by hanging. The deceased lived in Surat, Gujarat with his wife and worked in a sari printing company. He had returned to his village 20 days back.

Lallu said, “The reports had suggested 20 persons had committed suicide in Banda alone during the lockdown. Who is responsible for these deaths? If jobs are being provided then why are people committing suicide?”

The UPCC vice president Virendra Chaudhary said that Banarsi silk industry worth Rs2,000 crore, which was already in a precarious situation before lockdown, has witnessed retrenchment of one lakh unskilled workers. The carpet industry of Bhadohi, which exported goods worth Rs1,200 crore, has come to a standstill. About three lakh workers employed in shoe making units in Agra are sitting idle, since there is no work.

The traditional chikan craft of Lucknow is also lying shut. While all these workers are facing unemployment, the PM and the CM are busy in self glorification.

Congress demanded at least 200 days employment in a year under NREGA.