A flooded room in a South 24 Paragnas Hospital. | —PTI 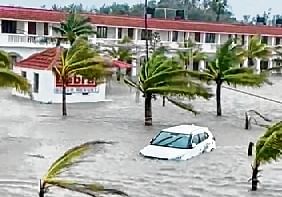 Cyclone Yaas, packing winds of up to 130-145 kmph, whi­plashed the country’s eastern coasts on Wednesday, dumping heavy rain, damaging houses and farmlands, and leaving over 4 persons dead — 3in Odisha and 1 in Bengal — officials said.

Thick sheets of rain blurred the vast coastline, as the cyclone made landfall around 9 am near Dhamra port in Odisha, with surging waters swamping the mud-and-thatch houses in the low-lying areas, where a massive evacuation drive has been undertaken to move more than 20 lakh people to safety.

Residents of several parts of the two coastal districts of Balasore and Bhadrak, which bore the brunt of the 'very severe cyclonic storm', are staying without power since Tuesday night while many people have been evacuated to safer places by the government.

Seawater inundated several villages in Bahanaga and Remuna blocks in the Balasore district, and Dhamra and Basudevpur in the Bhadrak district, the state's Special Relief Commissioner PK Jena said.

The state government distributed dry foods and the relief materials sent by Red Cross Bhawan in Bhubaneswar to the affected areas.

The storm, which had weakened during the afternoon, had left the coastal states on edge, with the Bengal government claiming that at least one crore people have been affected damaging almost three lakh houses and 154 dams, according to a primary survey.

In West Bengal, several people were seen running to take shelter in Mandarmoni area in East Midnapore and in Diamond Harbour in South 24 Parganas as the sea and river condition became extremely rough. “Our house got completely wiped off due to the flood; we have lost everything,” said a weeping woman. The West Bengal government had opened 14000 relief camps where 15 lakhs people had taken shelter there. Relief worth rupees 10 crore was distributed and all the people were given dry foods and water in all the shelter camps.

Sources said four persons were killed, but there was no official confirmation yet. NDRF personnel were seen ferrying elderly people to safer places.

The Army has deployed 17 columns in West Bengal to assist the administration, a defence official said. Rescue operation by the Army was also underway in Howrah district. 'Yaas' is the second cyclonic storm to hit India within a week after 'Tauktae' tore into its western coast, causing death and destruction.

Meanwhile, Odisha Chief Minister Naveen Patnaik on Wednesday announced seven days of relief for families affected due to the cyclone.

West Bengal Chief Minister Mamata Banerjee will visit the cyclone-hit areas on May 28, along with chief secretary Alapan Bandhopadhyay, officials said on Wednesday. Very severe cyclone Yaas, after making its landfall in 20 km south of Balasore, had brought severe destruction in both Odisha and West Bengal.

Monitoring the condition herself from the control room in West Bengal state secretariat, Chief Minister Mamata Banerjee said a 3-member team will conduct an aerial visit to the affected places in East Midnapore and South 24 Parganas on May 28 to ascertain the real damages that the severe cyclone has caused.

“Since the weather will not be conducive on May 27, the team, including Alapan Bandhopadhyay and I, through helicopter will visit Hingalganj and Sagar Island and after taking stock of the situation will hold a review meeting at Digha on May 28. On May 29, we will visit Digha, Mandarmoni and Nandigram,” said the CM.

Addressing the media, Mamata said according to primary reports at least 3 lakh houses damaged and cultivable land was damaged due to seeping of seawater.

“At least 1 crore people have been affected and 3 lakh houses damaged due to very rough weather conditions. 15,04,506 people have been evacuated and kept in safety. According to primary reports, 154 dams have been damaged, the number is likely to increase,” said Mamata, asking the officials to keep medicines of waterborne diseases ready. The CM said a man was ‘accidentally’ killed as he had gone out for fishing and she would get the actual estimate of the damages in 72 hours.

Notably, 17 companies of the army have been deployed and Indian Navy has been kept on standby to help the state, if needed.

Widespread rains and sea incursion were reported in parts of Kerala on Wednesday and authorities issued an alert to people living on the banks of water bodies. Except the northern districts of Malappuram, Wayanad and Kasaragod, parts of the rest of the 11 districts received copious rains accompanied by strong winds, prompting the met dept (IMD) to sound a ‘yellow alert’ there. Shutters of Kallarkutty dam in Idukki and Aruvikkara Dam were opened in view of heavy rains. Authorities warned people living on the banks of water bodies in Pathanamthitta district to be extra vigilant as the water level was steadily rising. Sea incursion was reported in various districts, including Thiruvananthapuram, Kollam and Ernakulam. Uprooting of trees and water-logging of low-lying areas were also reported across the state. Meanwhile, 1 fisherman died and 2 were still missing after 5 small fishing boats capsized off Vizhinjam coast in Kerala on Tuesday night. Indian Coast Guard aircraft and ship have been carrying out rescue and search operations in the area.

According to coastal police, there were a total of 17 people on five boats, of which 2 are still missing. Ahead of the predicted landfall of the “very severe cyclonic storm” Yaas on the north Odisha-West Bengal coast on Wednesday aftenoon, West Bengal CM Mamata Banerjee spent the night in state secretariat, Nabanna reviewing preparations and monitoring the situation on ground. The state government has set up a round-the-clock control room in the secretariat annexe to monitor the situation.

As Super Cyclone Yaas hit coastal areas of Odisha on Wednesday morning, the Bihar government deployed 22 teams of NDRF and SDRF in districts adjoining to Jharkhand and West Bengal. The met department predicts heavy rainfall in the state with strong winds at the speed of 80 to 100 kmph expected from Thursday morning. It has also alerted people of Bihar to stay away from open spaces, trees to avoid getting struck by lightning. The effect of Yaas can be witnessed in Katihar, Khagaria, Madhepura, Saharsa, Supaul, Nawada, Lakhisarai, Aurangabad, Patna, Bhojpur, Buxar and Vaishali districts. The officials believe the impact of Yaas in southern and central Bihar will be higher compared to north Bihar. Yaas is heading in a southeast to northwest direction in Bihar. The NDRF has deployed 113 teams in 5 states and a UT — West Bengal, Odisha, Jharkhand, Andhra, Tamil Nadu and Andaman and Nicobar Island — as part of its preparation and response to the Yaas — the highest ever such deployment in the rescue operation.

Jharkhand, which was put on high alert, continued evacuating lowlying areas on Wednesday amid the forecast cyclone Yaas was to hit the state by midnight after pounding neighbouring Odisha and West Bengal. Operations are being executed on war-footing in the vulnerable areas in East and West Singhbhum, besides some other districts, in view of the very severe cyclonic storm Yaas, Disaster Management Secretary Amitabh Kaushal told PTI. “We are witness­ing high-speed wind and have evacuated about 6,000 persons from thatched houses and danger zones to shelter homes in safer locations,” East Singhbhum Deputy Commissioner Suraj Kumar said. People are being shifted from low-lying areas near the two rivers in the district that are below the danger mark at present, he said.