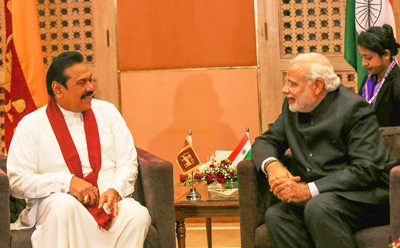 Colombo : Will he or won’t he? This was the question doing the rounds in Colombo and New Delhi for several days, since nobody was quite sure whether Prime Minister Narendra Modi would meet with the former Sri Lankan president, who, some say, foolishly called early elections and then went on to blame the US and Indian intelligence agencies for his fall.

The old fox of Sri Lankan politics, however, tried to distance Prime Minister Modi from the ‘coup charge’ by attaching a fig leaf of respectability by saying that he did not blame the current Indian Prime Minister, but that the plot was hatched some years ago.

Prime Minister Modi’s official agenda, which has been packed with several one-on-one meetings with Sri Lankan politicians, was conspicuous in its silence about the possibility of meeting with Rajapaksa.

The former president stayed away from the city on both the days, only leaving for downtown by late afternoon on Saturday. Quite aware that the government of President Maithripala Sirisena and Prime Minister Ranil Wickremesinghe would not favour a rapprochement between him and the Indian establishment, Rajapaksa, politically savvy but extremely calculative, also knows that he needs to rebuild bridges with India.

The Tamil votes matter. He cannot hope for a return to power by completely alienating the Tamils.

Rajapaksa came in for a lot of criticism for his foreign policy, having painted the country as a human rights violator.  The UNHRC resolution against Sri Lanka was his doing. His obsession with China at the cost of alienating India and sticking to that despite grave consequences did not deter him. Rajapaksa thought being cunning is a mark of a shrewd statesman. But he was a bit too cunning for his own good. However, he is a quick learner. And India cannot close any option in Sri Lanka.

This is valid for every politician, the ones who rule as well as those waiting in the wings to rule.