While the speedy trial is underway, a question in everybody's mind is whether a judgement will come before Justice Gogoi retires on November 17.
IANS 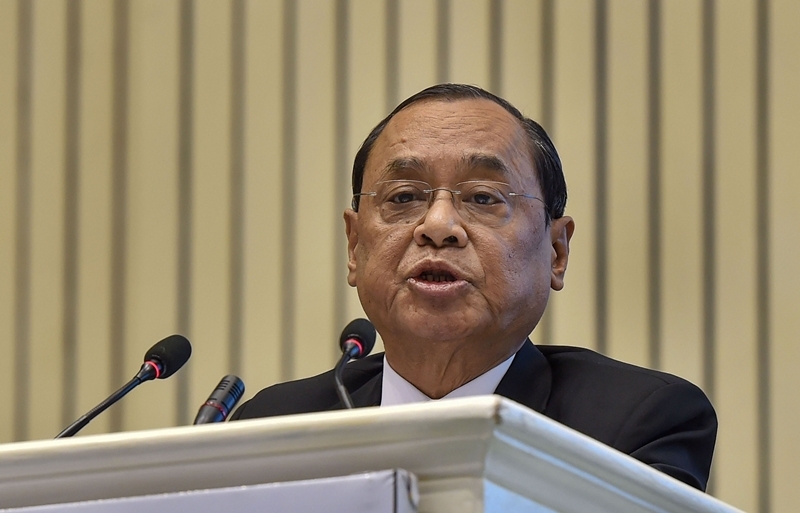 New Delhi: The vexed seven-decade-old Ayodhya dispute is finally on the fast track in search of a judicial solution, thanks to the day-to-day hearing by a five-member Supreme Court Constitution bench headed by Chief Justice Ranjan Gogoi.

While the speedy trial is underway, a question in everybody's mind is whether a judgement will come before Justice Gogoi retires on November 17.

After a court-appointed mediation panel failed to evolve a consensus among the various parties of Hindus and Muslims on the dispute, Justice Gogoi decided to conduct hearing on all working days of the week.

The matter reached the Supreme Court after the Allahabad High Court in 2010 gave a verdict to divide the 2.77-acre land in Ayodhya equally among the three parties -- the Sunni Waqf Board, Nirmohi Akhara and Ram Lalla.

The lawsuit, filed by the deity in Ayodhya case, has also included the birthplace as a co-petitioner, and together it has sought claim over the 2.77 acre of the disputed site, where the disputed Babri Masjid was razed in December 1992.

A lawyer connected with the case, speaking on the condition of anonymity, said: "Since the Chief Justice has taken up this case, he is expected to deliver a judgement on it before he retires...

If he is not able to deliver the judgement during his term, then the case would have to be heard afresh by another bench. This usually never happens."

The bench has already conducted six day-long hearings and so far, Nirmohi Akhara has completed its argument and counsels of 'Ram Lalla Virajman' (the presiding deity at the disputed site) are arguing the matter.

On the sixth day of hearing in the Ayodhya case, the counsel for 'Ram Lalla Virajman' claimed that there was enough archaeological evidence to establish that the mosque was built on temple ruins, and so Sharia law would not recognize the structure as a mosque.

Senior advocate C.S. Vaidyanathan, the counsel representing deity Ram Lalla Virajman, told the court that the basis of his claim originated from various travelogues and sketches prepared by foreign visitors where a distinct image of a place revered by Hindus, for its immemorial divinity, has been identified in Ayodhya.

He pointed out that the travelogues of foreigners such as Joseph Tiefenthaler (early 18th century Jesuit missionary), Montgomery Martin (both British surveyors) and English merchant William Finch and others, establish historical evidence of people having faith in Lord Ram at a particular site in Ayodhya.

These foreigners were never under any compulsion to lie, he said. "If a mosque is built on the ruins of a temple, it cannot be a valid mosque," Vaidyanathan argued, stating it is against the Muslim belief.

He cited a travelogue written by English merchant William Finch (1608 - 1611), who during his visit to India, documented how Hindus believed Ram was born in Ayodhya, and that there was also a fort.

"Finch's travelogue published in the book 'Early Travels to India', documents Hindus believed Ayodhya was the birthplace of Lord Ram," he told the court.

The Hindu parties majorly do not agree with the Allahabad High Court's decision to divide the land between three parties. Vaidyanathan said a joint possession of the site was not possible. "Faith cannot be dissected, bisected or trisected.

The continuity of faith and belief shows despite other religious influences, the faith of Hindus continued, and it is established by continuity in the pilgrimage," he argued.

The Hindu parties focussed their argument on the applicability of law on temple, idols and 'janmasthan' (birthplace) -- a confluence contributing to the Hindu faith.

Senior advocate K. Parasaran, another counsel who appeared for the Ram Lalla Virajman, argued on the essence of Hindu religion and how the birth of Lord Ram was connected to the faith of millions of people.

He had apprised the judges that Lord Ram was an 'avatar' (incarnation) of Lord Vishnu, and it was for the Hindu faith that Ayodhya was chosen as his birthplace. Therefore, 'janmasthan' was directly connected with Hindu faith.

Parasaran argued that a juridical person, subject to law, can drive the interest or faith of a community as an object, and it was for the court to protect such interests.

The veteran advocate said that he was not seeking control over the entire Ayodhya region, but only a defined place where the Hindu faith believed that Lord Ram was born.

Parasaran had cited temple as a juridical person, subject to law, and argued to establish the significance of faith. He submitted before the Constitution bench that even hills were worshipped as deities and recalled the 'parikramas' in Thiruvannamalai and Chitrakoot.