While several states including Odisha, Maharashtra,Tamil Nadu among others have decided to cancel their class 10 and 12 board exams, Andhra Pradesh is seeking a way to conduct it

The state's Education Minister Adimulapu Suresh recently said that the government is trying to conduct examinations for Class 10 and intermediate keeping students' future in mind and added that cancellation of exams is the last resort only.

Addressing a press conference here, the minister said that it would have been easy to take a decision to cancel the exams but the future of the students is the government's priority.

Suresh accused the opposition TDP of creating fear in the minds of the students and their parents and unnecessarily politicising the issue of examinations.

The Minister said, "The State government is trying to conduct board examinations for Classes 10 and 12. The cancellation of exams is the last resort only. It is in the interest of the students only that the state government is trying to conduct the exams. Cancellation of exams is a matter of one minute but students' future is our priority. TDP is unnecessarily politicising the matter of exams and creating fear in the minds of students and parents. But many students and parents are ready for exams." The minister said that it requires almost 40 days to conduct exams.

Suresh stated that conducting competitive exams like JEE and NEET will also be taken into consideration, adding that once the severity of the COVID infection comes down and the conducive atmosphere prevails, then only the exam schedule will be announced. Most probably, the exams may be conducted in July, he added.

The Education Minister said that the State government is providing job opportunities to 2,193 candidates who wrote the District Selection Committee (DSC) exam in 2008 but their selection is pending due to legal hurdles.

He further informed that criteria conditions for appointment of candidates of DSC exams in 2008 were changed. With that, almost 4,000 candidates have lost the chance to get jobs. Some of them have filed cases in the courts.

He, however, added, "Chief Minister YS Jagan Mohan Reddy had assured justice to those candidates during his padayatra before elections and now after becoming CM, Jagan is now fulfilling the promise. Now 2,193 candidates are being given job opportunities as Secondary Grade Teachers (SGTs) with a minimum time scale, by resolving legal hurdles. Soon almost 900 other candidates will also be given jobs by clearing the court cases." The CBSE board exams for Class 12 were cancelled on June 1 after a high-level meeting between PM Narendra Modi and education ministers and education secretaries of the different states of India. The decision was taken to protect the safety of students amidst the COVID-19 pandemic. 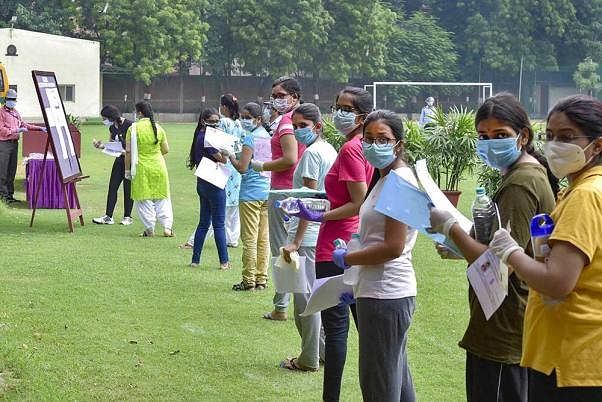