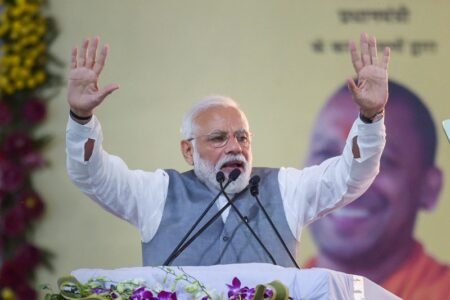 New Delhi:The Congress on Thursday slammed the Modi government for its helplessness before China blocking declaration of JeM chief Masood Azhar as an international terrorist just to please Pakistan, dubbing as a major setback in the global fight against terrorism.

Its chief spokesman Randeep Singh Surjewala asked the PM to answer to the nation why he became “Maun Modi” (Silent Modi) to allow compromise of India’s interests by bending over backwards before China over last five years that culminated in the present situation.

He cited many instances of China humbling India, be it a full-fledged military complex built in Doklam only 10 metres from Indian Army posts, intrusion into the “chicken neck” — Siliguri corridor through south Doklam, upgrading air base near Sikkim, opposing India’s membership of the UN Security Council and blocking India’s entry in the Nuclear Suppliers Group by asking for parity with rogue Pak.

Surjewala and party spokesman Shakti Sinh Gohil chided Modi for answering all this humiliation with “Jhoola Diplomacy” in Gujarat, hug diplomacy in Delhi, for agenda-less visits to China without the mention of Masood Azhar or Doklam, not raising Azhar issue at all in whole of 2018 and shelving Mountain Strike Corps that was to be raised for strengthening security along the China border.

Meanwhile, Congress President Rahul Gandhi on Thursday called PM Modi “weak” and “scared” of Chinese President Xi Jinping, provoking an angry reaction from the BJP. Gandhi hit out at Modi a day after China blocked the naming of JeM chief Masood Azhar as a global terrorist by the UN.