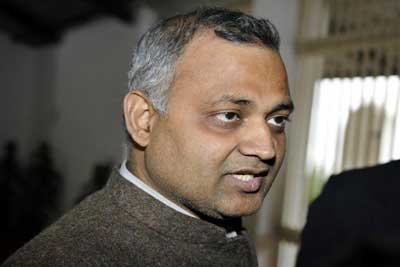 New Delhi: Somnath Bharti’s lawyer today made a veiled attack on Delhi Chief Minister Arvind Kejriwal for “not supporting” the embattled AAP MLA, saying he should have taken a cue from Prime Minister Narendra Modi who “stands” by his “loyalists” through “thick and thin”. In a letter to Kejriwal, Bharti’s counsel Deepak Khosla demanded that the case be taken from Delhi Police and handed over to other agency for a “fair investigation”.

He claimed the case has been “blown out of proportion” and urged the Chief Minister to issue directions to Delhi Police to refrain from using terms such as “absconder” or “professional criminal” to describe the former Law Minister. He also sought a meeting with the Chief Minister to “advance” the objectives of a lawful and fair investigation while protecting the interests of Bharti.

“In this view of the matter, you are requested to kindly issue appropriate directions for deferment of investigation for 72 hours, so that my client may approach a competent Ccurt of Law, and seek transfer of the investigation to some other agency.”

Soon after sending the letter, Khosla also issued a clarification saying the remarks had got nothing to do with Bharti and was made by him in his “personal capacity, as a current and continuing supporter of AAP”.

“…if there is one big distinction between Narendra Modi’s style of functioning and yours – whether good or bad – is that he stands by his loyalists through thick and thin. Cases in point are Sushma Swaraj, Smriti Irani…. Whereas you (prematurely) shed your support for Somnath Bharti like a hot potato,” the lawyer said.

‘Bharti failed to get relief from the Supreme Court today which directed him to surrender before the police in connection with the domestic violence and attempt to murder case filed against him by his wife.

Khosla said Bharti was not “evading” arrest. Avoiding arrest was his (Bharti) right and “all the more so when he finds that he is being hounded by a distinctly partisan and biased investigating agency,” the letter said. “In the present context, given the unusual separation of powers in the State of NCT of Delhi and the different political masters the Delhi Police reports to, it is clear that your police force is acting on the dictates of its political masters who run the central government i.e. the BJP,” it said.