Who will be Karnataka's next CM? Assembly speaker Vishweshwar Hegde Kageri may emerge as dark horse; here's full list of frontrunners 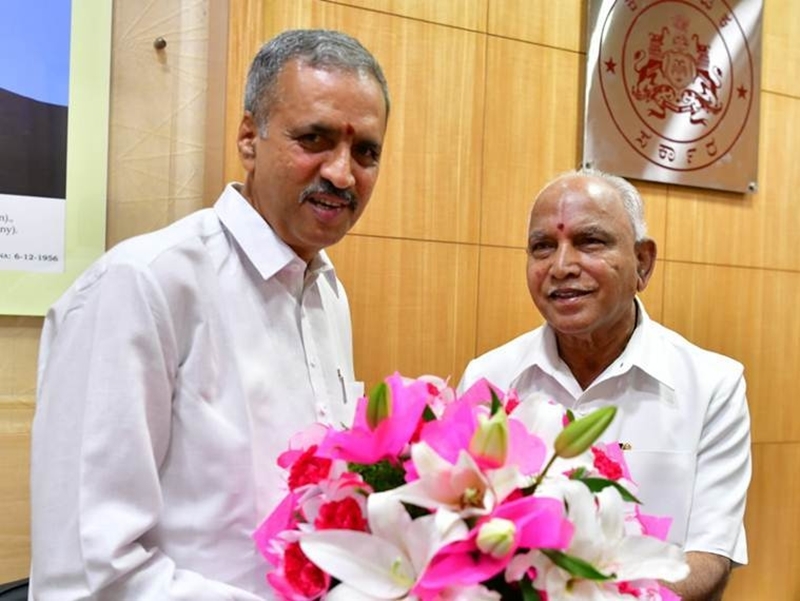 After BS Yediyurappa tendered his resignation as chief minister to Karnataka Governor Thawar Chand Gehlot on Monday, the focus has now shifted to who will succeed him. There are many names doing the rounds, but the high command is aware that the new CM must be able to get along with the grand old man of the BJP in Karnataka – 78-year-old BSY.

Sources said that party observers are likely to come to Bengaluru on Tuesday, but it is well known that they will be coming with a name vetted and cleared by PM Narendra Modi, Home Minister Amit Shah and party president JP Nadda.

While it will be a big task for the party high command to replace Lingayat strongman Yediyurappa, New Delhi is not averse to looking beyond the community, the major vote bank for BJP in Karnataka. The party is looking to balance the three major communities -- Lingayat, Vokkaliga and Brahmin communities.

Some names have been doing the rounds for a few days, but on Tuesday a dark horse emerged -- Assembly speaker Vishweshwar Hegde Kageri, a six term MLA from Sirisi. A Brahmin, he has a clean record and has been conducting the Assembly sessions with authority. Incidentally, he met the Governor on Monday.

1. Prahlad Joshi, Union Parliamentary Affairs Minister: He is a Brahmin. His name gained prominence after a leaked audio of Karnataka BJP president Nalin Kumar Katel spoke of the next CM coming from Delhi. Joshi (58), the four-time MP from Dharwad, is known to be close to PM Modi and other national leaders of BJP and the RSS. He led the BJP in Karnataka after Yediyurappa left the party and formed the Karnataka Janata Party (KJP) in 2013. Joshi is considered as an able administrator and hence he was retained in the central cabinet. But Karnataka has not seen a Brahmin chief minister since 1988 as the Lingayats are against such a move.

2. Murugesh Nirani (56): A Lingayat from the dominant Panchamshali sect, he is currently minister for mines and geology in the state government. There has been a demand from the Panchamshli sect for the CM post, but sources said that the RSS does not favour him. But Nirani’s proximity to Shah might tip the balance in his favour. The three-time MLA from Bilgi constituency in Bagalkot district, Nirani runs sugar and ethanol factories in the north Karnataka region.

3. Arvind Bellad (51): A two-time MLA and a young face, is the son of veteran RSS and BJP leader Chandrakant Bellad. He comes with a solid academic background with an engineering degree, PGDM in business management from INSEAD in France. He also comes from the Panchamasali Lingayat sect.

4. Basavaraj Bommai (61): He is the current home minister of Karnataka and a close aide of Yediyurappa. Bommai, also from the Lingayat community, is the son of former chief minister S R Bommai and was considered the most likely one to replace Yediyurappa a few months back.

5. CN Ashwath Narayan (52): He is the current deputy CM and comes from the Vokkaliga community. A doctor by qualification, he is seen as a young and educated leader who maintains a good image in the political circle. He is an MLA from Malleshwaram, Bengaluru, since 2008 and was made deputy CM reportedly after his successful involvement in the alleged poaching of MLAs from Congress and JD(S) to form the government. He comes from a prominent Vokkaliga belt and has been the face of the community in the party.

6. CT Ravi (54): He is a Vokkaliga, served as a cabinet minister in the Yediyurappa government and became the national general secretary of the party. With a Sangh background, he is considered close to BJP’s national organisation secretary BL Santosh and other central leaders. He is a four-time MLA from Chikkmagaluru and a Hindutva hardliner. If BJP is serious in having a CM from the Vokkaliga community, Ravi fits the bill.

7. BL Santhosh: A mystery man and the BJP national organising secretary. He was earlier a full-time RSS volunteer from Karnataka. He was a powerful figure in charge of the party in Karnataka but does not enjoy a good relationship with Yediyurappa. He is a Brahmin from Udupi and had mysteriously gone silent for nearly two months only to surface in Bengaluru on Monday. If the RSS interferes in the selection of the next CM, then Santhosh stands a chance, but that may upset many equations.