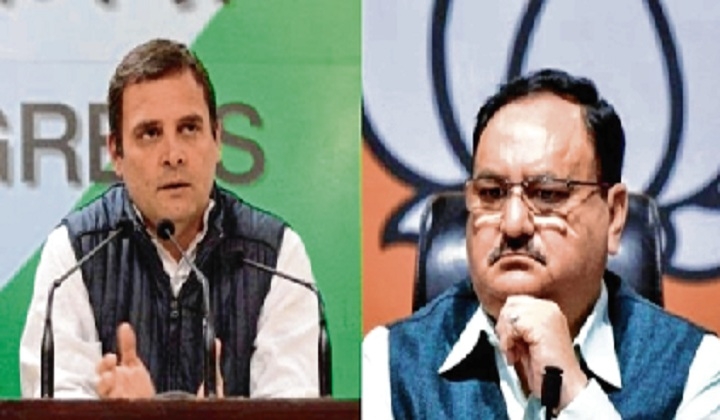 Congress leader Rahul Gandhi on Sunday again attacked the government over the Ladakh standoff, and asked what happened that China “took away” India’s land when PM Modi is at the helm. He also tagged a news report quoting a defence expert, alleging the government is “misleading” the media on the Chinese disengagement along the LAC and that disengagement at the Galwan Valley is disadvantageous to India.

“What has happened that under Modi ji rule, China took away Mother India’s sacred land,” he asked in a tweet in Hindi. Gandhi has been attacking Modi and his government on the standoff in Ladakh and has accused the PM of “surrendering” India’s land to China.

The Bharatiya Janata Party (BJP) President JP Nadda on Sunday said Congress leader Rahul Gandhi was meeting the Chinese Ambassador "secretly" during the Doklam standoff and alleged that his love for the nation is "fake".

"The people of India know that Rahul Gandhi was meeting the Chinese Ambassador secretly during the Doklam standoff and you misled the nation and did not inform the country. India got to know only when the Chinese Ambassador broadcast your picture with him online. This 'love for your nation' is fake. You've missed all 11 defence committee meetings. This is how you run a country?" he said after inaugurating the newly constructed BJP District Committee office 'Dr Syama Prasad Mookerjee Mandiram' in Kasaragod, Kerala.

"UDF, LDF, Congress have always kept the nation in the dark. I call upon the workers and people of Kerala to leave LDF, UDF and Congress to join the BJP and make the state stronger," he said.

Notably, earlier today Gandhi had targeted the Central government over the June clash between Indian and Chinese soldiers and asked what had happened that China "took away" the sacred land of India.