Kolkata: State Election Commission (SEC) on Monday submitted an affidavit to Calcutta High Court over holding the civic polls as per schedule.

“Four districts Bidhannagar, Chandannagar, Asansol and Siliguri will go for polls on January 22. The SEC has assured that by maintaining all the pandemic protocols they will peacefully conduct the polls. The hearing of this matter is scheduled on Tuesday,” said High Court sources.

It can be noted that on Saturday the SEC had instructed all the political parties to campaign virtually in order to avoid large gatherings on the road.

Meanwhile, the state government in a virtual meeting with the SEC had asked them to deploy armed state police in all the booths.

According to state government sources, a total of 9000 police will be deployed across all the districts going for polls.

“In Bidhannagar 468, in Chandannagar 169, in Asansol 1020 and in Siliguri 421 police will be deployed. Every police officer will undergo RT-PCR test before being deployed,” said the state government sources.

Slamming both theSEC and TMC government, Left Front leader and senior politburo member Bikash Ranjan Bhattacharya said that if the number of police in keeping with the booths is divided then it will be easier for the TMC to ‘loot’ votes.

BJP spokesperson Shamik Bhattacharya said, “Firstly due to rise in pandemic people won’t go out to vote and if a couple of voters vote then such lesser number of police will help TMC to rig the booths as police always works at the behest of the TMC,” mentioned Bhattacharya. 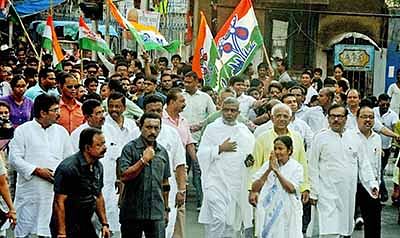