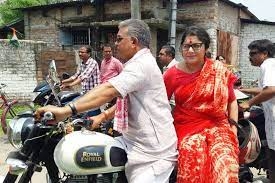 Kolkata: A day after West Bengal BJP Chief Dilip Ghosh said that he is in favor of separate statehood of North Bengal, BJP MP Locket Chatterjee said that West Bengal will not be divided and also that Bengalis prefer to stay united.

“Bengalis will never accept the breakage of West Bengal. Bengalis are always united. In keeping with the teachings of the saints, especially Tagore the state will not break,” said Locket.

Notably, a day before sitting beside BJP Alipurduar MP John Barla who in June demanded separate statehood of North Bengal, BJP Chief Dilip Ghosh also urged that the party will soon think over this issue.

“Even after 75 years of Independence people of North Bengal are deprived of basic and updated infrastructure for which the division is necessary,” Ghosh was heard claiming.

West Bengal Transport Minister Firhad Hakim said that due to short term gains the BJP should not break the country or any states.

“Government and political parties will come and go but the country and the states will remain and people will also stay. For short term gain and personal interest the country was broken. This division should not happen again. A party from outside Bengal is now trying to break Bengal,” claimed Firhad.

Former BJP national secretary Rahul Sinha while attending Rakhsha Bandan at party headquarters also claimed that the question of dividing West Bengal is ‘not there in BJP’s agenda’.