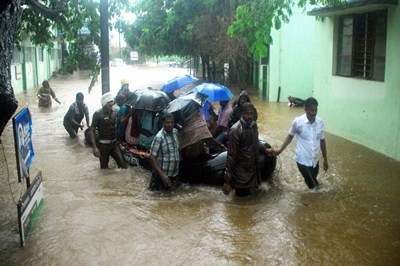 With rivulets, streams, lakes and other water bodies overflowing, flood water entered many residential areas. Roads turned into rivers while colonies resembled like lakes in the affected districts.

Undivided Warangal, Adilabad, Nizamabad and Karimnagar districts were worst affected by the incessant rains since last night. Some villages in these districts were cut off due to flood water on connecting roads.

Chief Minister K. Chandrasekhar Rao, who is in Delhi, reviewed the situation with Chief Secretary Somesh Kumar over phone. He directed that the entire administration be alerted to take up rescue and relief works in rains affected areas.

Rajanna Sircilla district was badly affected by heavy downpour. Sircilla town was under deluge. Many residential areas in the town were marooned as the district administration began shifting people to safe places.

An under-construction bridge near Vemulawada collapsed due to heavy rains and floods. The bridge was being constructed at a cost of Rs.28 crore to improve connectivity to Vemulawada temple.

The minister directed the district officials to undertake relief measures and shift people from marooned areas to relief camps.

Rama Rao said Disaster Response Force (DRF) teams will be sent to Sircilla from Hyderabad for rescue and relief operations. He directed officials to remain on alert in view of forecast of more rains in next 48 hours.

Meanwhile, Indian Meteorological Department (IMD) has forecast more rains in Telangana over next 48 hours. The meteorologists have warned of flash floods risk in parts of the state. Expecting moderate to high risk in few watersheds in the Bhadradri kothagudem, Adilabad and Kumaram Bheem Asifabad, Mancherial, Nirmal and Khammam districts, the IMD said.

Hyderabad Meteorological Centre said the heavy rains could lead to flooding/inundation in low lying areas and overflow of water on to bridges, water pooling on roads and low lying areas in most locations, crop damage and electricity, water and other social disturbances for few hours.