A rescue operation at the Dadam mining zone in Bhiwani's Tosham block is currently underway to locate the trapped persons.
FPJ Web Desk 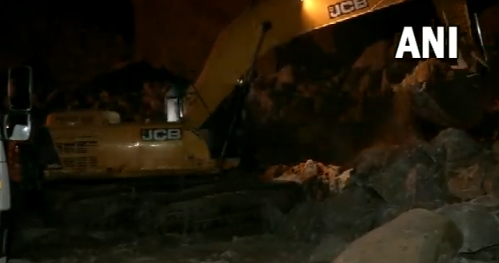 At least four persons were killed while several others were trapped following a landslide in a mining zone in Haryana's Bhiwani district on Saturday, the police said. rescue operation is still underway and there is chance of more people under trapped.

A rescue operation at the Dadam mining zone in Bhiwani's Tosham block is currently underway to locate the trapped persons.

Expressing grief over the incident, Haryana Chief Minister Manohar Lal Khattar directed Deputy Commissioner R.S. Dhillon to summon cranes, fire brigade and other machinery from adjoining districts to clear the debris so that the people buried under it could be rescued.

"As per local administration, two drivers are still trapped," says an official of NDRF

Four people have died in the landslide, as per State HM pic.twitter.com/q2IDc1XBYc

An official statement quoting Khattar said that there won't be any relaxation in the relief work.

Agriculture Minister J.P. Dalal, who visited the spot, told the media that a few people lost their lives and three were hospitalised.

Home Minister Anil Vij tweeted, "I am deeply saddened by the accident that has happened at the mining site in Bhiwani district. The rescue operation is being run by the administration. SDRF team has been called. An army unit has been called from Hisar. So far, 4 people have died."

Tosham MLA Kiran Choudhry blamed the mining activity which is being carried out illegally despite a ban imposed by the National Green Tribunal.

Several people were travelling to another site when the landslide occurred and they got trapped in their vehicles, the police said.