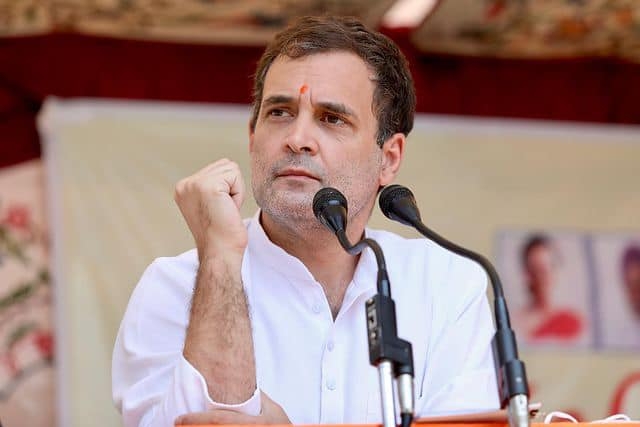 Congress leader Rahul Gandhi arrived in Jammu and Kashmir on Thursday for a a two day visit. The Wayanad MP paid obeisance at the Mata Vaishnodevi temple after undertaking a foot journey to reach the cave shrine atop the Trikuta hills in Reasi district. On Friday afternoon he also addressed a gathering of party workers in Jammu.

Gandhi had visited the Union Territory exactly a month ago, inaugurating the party's new office in Srinagar city. While the first day of his schedule did not include any political events, Gandhi on Friday interacted party delegates at JK Resorts at Trikuta Nagar. This will be followed by a luncheon interaction with senior party leaders before he flies back to Delhi.

Large crowds assembled at different locations besides reaching at Katra to welcome Gandhi. There was also a high turnout at the interaction held in Jammu. But as the Congress leader continues his visit, a video clip from the interaction has garnered traction on social media platforms. "Jai Mata Di," Gandhi began his address. As many cheered, he urged them to echo the call, reiterating it again.

In related news, the Congress will hold the first meeting of the committee constituted by interim President Sonia Gandhi. On September 14, top leaders of the party will come together in the national capital to deliberate and formulate strategies on the campaign movements to be undertaken by the party against the policies of the Central government. According to reports quoting sources, the meeting will be chaired by Digvijay Singh.