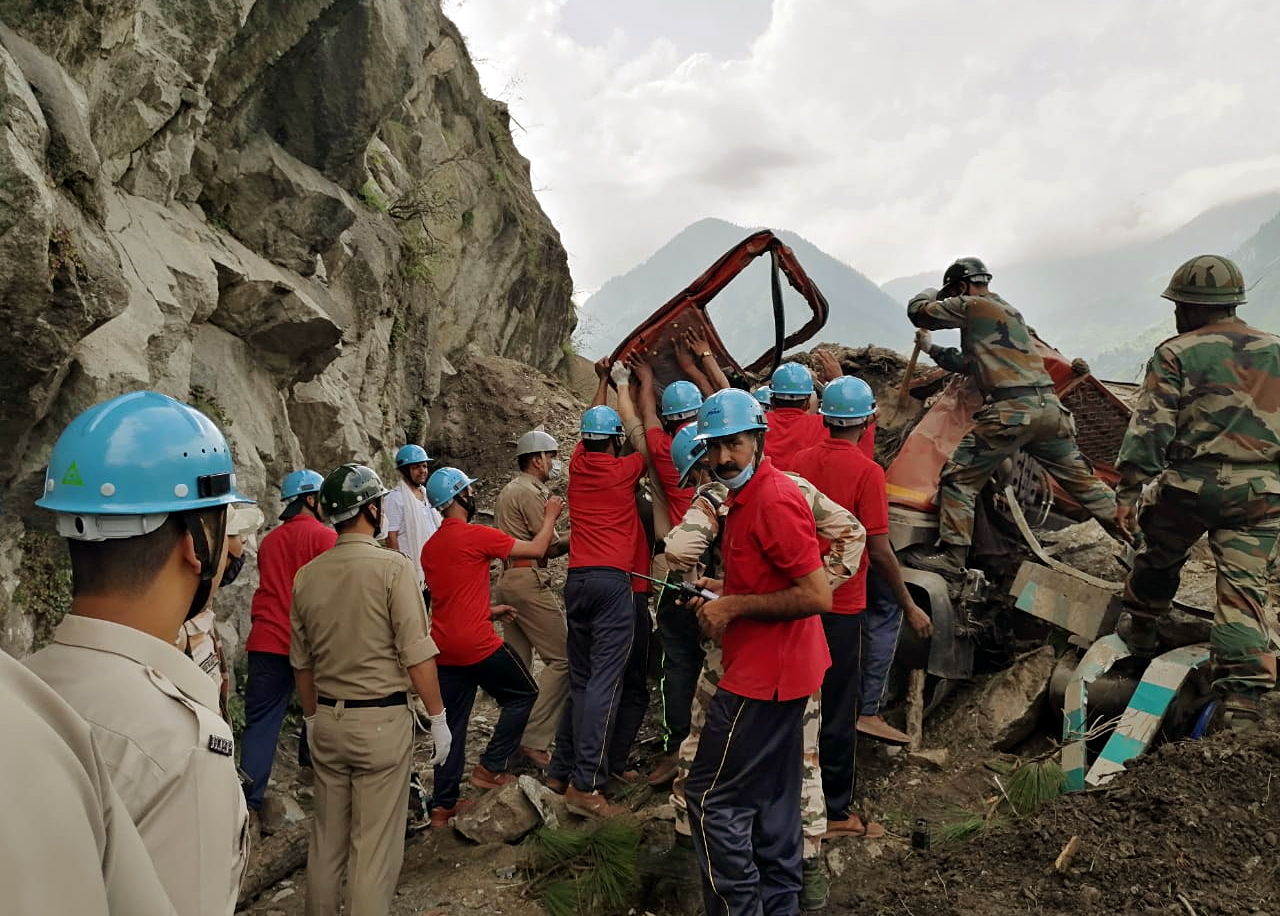 Shimla: Four more bodies were recovered from the landslide site in Himachal Pradesh's Kinnaur district where the search and rescue operation resumed early on Thursday, raising the death toll to 14, officials said.

A Himachal Road Transport Corporation (HRTC) bus, which, along with other vehicles, was buried under the debris, has been found in a badly damaged condition, State Disaster Management Director Sudesh Kumar Mokhta said.

However, a Bolero car also feared buried under the rubble could not be traced, he said.

The HRTC bus was on its way from Reckong Peo to Haridwar via Shimla when it was hit by boulders after the landslide around Wednesday noon near Chaura village on national highway-5 in Nigulsari area of Nichar tehsil.

In a video clip that surfaced on social media, a rescuer working at the site near the mangled remains of the bus is heard saying that the vehicle was found by the Indo-Tibetan Border Police (ITBP) 17th Battalion personnel. Another rescuer says that gloves should be brought for continuing the rescue operation.

The DC told PTI that 14 bodies have been recovered so far. Thirteen people were rescued with injuries on Wednesday, while several others were still feared buried under the debris. However the exact number was not known.

In a touching Facebook post, Lokendra Singh Vedic, a resident of Shimla, said his father's body has been found but rescuers are yet to find his head.

The rescue work, being carried out jointly by the National Disaster Response Force (NDRF), the ITBP, the local police and home guards, resumed at 6 am, Mokhta said.

Meanwhile, a two-minute silence was observed in the state assembly to pay homage to those who died in the Kinnaur landslide.

Bhardwaj said the landslide occurred at the place where people usually stop their vehicles to look at the scenic view and take photographs.

The state government had requisitioned four helicopters for rescue work on Wednesday itself but they could not reach at the site due to bad weather, he added.

Expressing his condolences, CPM MLA Rakesh Singha said the factors that cause such landslides should also be examined and rectified.

The authorities had suspended the operation at around 10 pm on Wednesday.

The Bhawanagar station house officer (SHO) had said around 25 to 30 people were trapped under the debris.

When the initial reports came, the chief minister had told the state assembly that 50-60 people were feared trapped under the debris but the exact number was not known.

The Kinnaur deputy commissioner had also told PTI that over 40 passengers were in the bus.

Eight of the dead were found trapped in a Tata Sumo taxi during the search and rescue operation on Wednesday.

A truck rolled down towards a riverside due to shooting stones and the driver's body was recovered, officials said.

A car had also been found in the damaged condition on Wednesday but no one was found in it, they added.