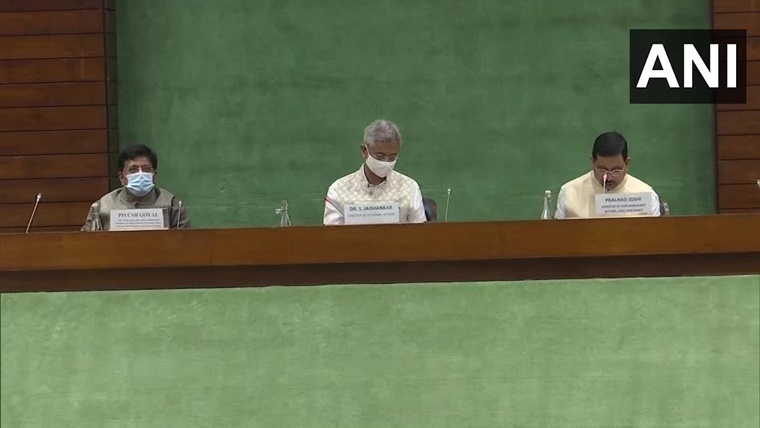 External Affairs Minister S Jaishankar on Thursday said that India's focus is on evacuation and the government is doing everything to evacuate people from Afghanistan post the Taliban takeover.

Speaking after an all-party meeting on the current situation in Afghanistan, Jaishankar said that the government is very strongly committed to ensuring full evacuation as soon as possible. "We briefed the Floor Leaders of all political parties today on the Afghanistan situation today. Our focus is on evacuation and the government is doing everything to evacuate people."

He further informed that under Operation Devi Shakti, the government will try and evacuate Indians from Afghanistan.

"Under Operation 'Devi Shakti' we have done six evacuation flights. We have brought back most of the Indians but not all of them as some of them couldn't make it for the flight yesterday. We will definitely try and bring out everybody. We've also brought out some Afghan citizens," said Jaishankar.

"We are also seeing that in terms of any international decisions which are made, any gatherings that are there, that our role is recognized. There will be many more meetings in the coming days," Jaishankar added.

The meeting went on for three and half hours and 37 leaders from 31 parties participated. "Everybody spoke on the issue, I responded to everyone individually. We all had similar views," added Jaishankar.

"There is a longstanding national sentiment on Afghanistan. Therefore there is national concern now at developments. We gathered with a national spirit," said the External Affairs Minister.

Referring to the strong bond between India and Afghanistan, he said, "Our strong friendship with the people of Afghanistan is reflected in the more than 500 projects we have there. This friendship will continue to guide us. India's footprint and activities naturally keep in mind the ongoing changes."

He also termed the evacuation from Afghanistan as one of the most difficult tasks. "We have undertaken evacuation operations in extremely difficult conditions especially at the airport," said Jaishankar.

Evacuating Indian personnel from Afghanistan, where the situation is "critical", was a top priority, the government said on Thursday at the all-party meet, convened to brief on the Afghan situation.

External Affairs Minister S Jaishankar briefed the leaders on the latest situation in Afghanistan after the Taliban captured power there last week. Besides Jaishankar, Union minister and Leader of the House in Rajya Sabha Piyush Goyal and Parliamentary Affairs Minister Pralhad Joshi were also present during the briefing in the Parliament House Annexe.

India was trying to evacuate as many people as possible from Afghanistan, External Affairs Minister S Jaishankar said and asserted that evacuating Indian personnel was a "top priority", according to some of the participants at the meeting.

The government also described the situation in the war-torn country as "critical" and said the Taliban has broken the promises made in the Doha agreement.

Among other things, the Doha pact, inked between the Taliban leaders and the US in February 2020, envisaged religious freedom and democracy, with a government in Kabul that represented all sections of Afghan society.

The briefing comes after the Opposition parties asked the government to issue a statement on the Afghanistan crisis.

India, on August 17, had also announced that it would issue an emergency e-visa to Afghan nationals who want to come to the country in view of the prevailing situation in Afghanistan after the Taliban captured power there.

On August 17, Prime Minister Narendra Modi chaired a meeting of the Cabinet Committee on Security (CCS) and instructed all concerned officials to undertake all necessary measures to ensure the safe evacuation of Indian nationals from Afghanistan in the coming days.