Watch video: Delhi mother fights off kidnappers to save her 4-year-old

While the woman snatched back the child, one of the men ran away on foot while the other tried to flee on the bike.
IANS 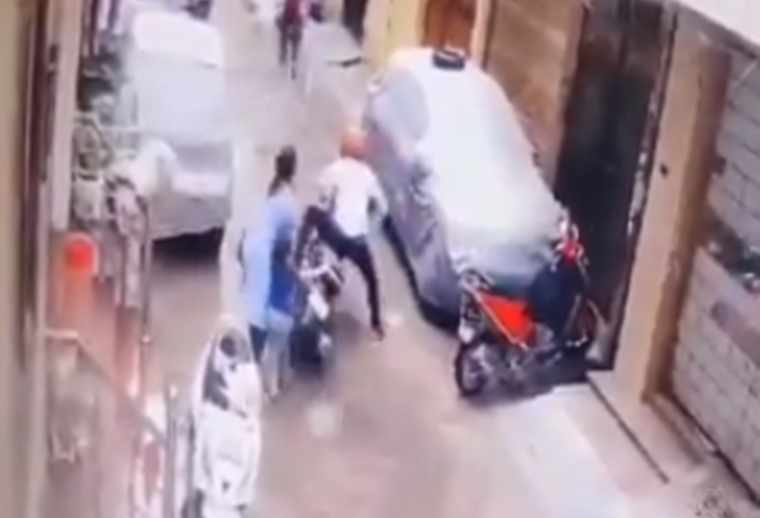 New Delhi: A woman resolutely held out against two motorcycle-borne men who tried to kidnap her four-year-old child in Shakarpur area of east Delhi, forcing them to flee without their bike.

The whole incident, on Tuesday, was captured on CCTV camera in which the two helmet-wearing kidnappers are seen forcibly trying to grab the child. However, the mother pounced on the bike like a lioness, making them panic and lose balance. While the woman snatched back the child, one of the men ran away on foot while the other tried to flee on the bike.

Hearing the shrieks of the woman, area residents gathered at the spot, and an alert man among them blocked the passage of the bikers with a two-wheeler. After a brief scuffle, the criminals managed to flee, leaving their vehicle behind.

Police have unearthed the conspiracy, and arrested two people, including the crime's mastermind.

"The bike was having a fake number plate but we managed to trace its owner, through the chassis number. Bike owner Dheeraj was arrested and on interrogation, revealed that the child's uncle, identified as Upender, was the mastermind of the kidnapping bid," DCP, East, Jasmeet Singh said.

A police team then raided the house of Upender, 27, in Krishna Nagar and arrested him.

"Upender tried to kidnap the child for ransom along with his hired men. He is not into any permanent job and planned to kidnap his brother's child to demand a ransom of Rs 30 to 35 lakh," said the officer.

The hired kidnappers did a recce of the area and on Tuesday, tried to kidnap the child after asking for some water from the mother.

The police said that the two bikers are on the run and teams have been formed to nab them. One out of four in Delhi exposed to coronavirus, reveals Study