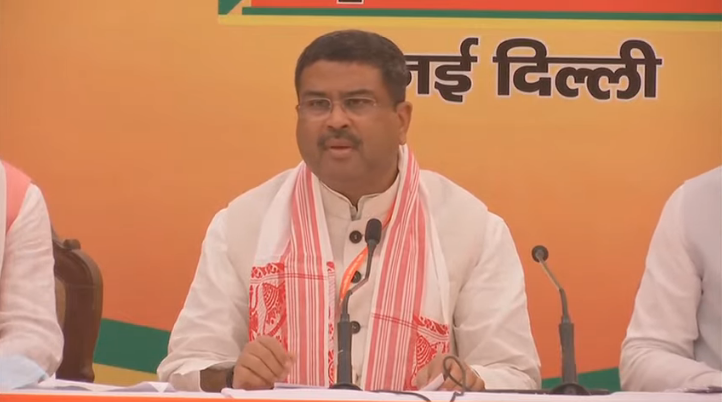 Pradhan, while addressing the media about the ongoing Bhartiya Janata Party (BJP)'s national executive meeting, said, "due to his global presence, today big countries of the world consider his administrative initiatives as an ideal in tackling the pandemic. PM Modi is taking the country forward in these challenging times." "More than 100 crore COVID-19 vaccinations have been done in the country. More than 30 per cent of the total population have received both doses. The World Health Organisation (WHO) has recognized the vaccines manufactured by India," Pradhan added.

The Minister said that the effects of COVID-19 have surrounded the country for the last two years, and all the countries of the world were affected by this pandemic. "For this reason, after a long gap, after about 1.5 years, the meeting of the BJP's national executive was held," Pradhan said.

Pradhan said that all participants at the meeting were registered digitally. "Around 342 people are taking part in this meeting today," he informed.

On BJP's growth in West Bengal, Pradhan quoting Nadda said if one looks at its growth in the state from the political science perspective, then there will be very few parallels of it in Indian political history.

Addressing media to brief about the ongoing national executive meeting of BJP, Pradhan said, "The BJP is standing like a rock in support with the people of Bengal. Nadda Ji today said that whenever elections will be held in Bengal in the coming times, BJP will fight to save Bengal in a democratic way, to restore ideal democracy in Bengal and will restore the faith of people in the Constitution."

According to Pradhan, Nadda said that if one looks at the BJP's vote share in the 2014 assembly elections and the 2016 assembly elections in West Bengal, and compares them with the 2019 Lok Sabha polls and 2021 assembly polls, it shows substantial growth of the BJP in the state.

The BJP's national executive meeting, which should be normally held once in three months according to the party's constitution, is being held for the first time since the outbreak of the COVID-19 pandemic last year.

At the NDMC Convention Centre, the meeting venue, musicians from across the country played traditional instruments to greet those attending the meet.

Prime Minister Modi while entering the venue met women, who in their traditional Chath attire and singing songs praising the Sun god, performed puja and rituals.

Chath will be performed in many parts of the country, especially in eastern parts of poll-bound Uttar Pradesh, Bihar and Jharkhand on November 10.