Voters, and especially young voters, are angry at the government, with unemployment and its root cause -- spluttering economic growth -- at the forefront. As it turns out, one cannot eat Hindutva ideology, nor use it to feed one's family

Local vernacular Hindi media channels claim that Prime Minister Narendra Modi, whose party seeks to defend its control of Himachal Pradesh - asked Kripal Parmar, who is contesting as an independent from Fatehpur assembly seat in Himachal Pradesh's Kangra district, to withdraw from contesting elections, due to be held either this month or the next (December).

Why Parmar is raising a stink

It is no secret that Parmar has been demanding a ticket from BJP to contest the assembly elections since 2012.

When Prime Minister Narendra Modi arrived in Himachal Pradesh for an election rally on Saturday earlier this week, he was told about the party's rebel leader Parmar, by local power-brokers.

Himachal is in play

As to the issues relevant to the state elections - it is the same sad story told all over the country:

Voters, and especially young voters, are angry at the government, with unemployment and its root cause -- spluttering economic growth -- at the forefront.

As it turns out, one cannot eat Hindutva ideology, nor use it to feed one's family.

It isn't that the country is precisely floundering on economic growth - on the contrary, the Indian economy has proven to be remarkably resilient to external volatility.

But the growth is extremely lopsided, benefitting the upper middle classs in the cities, vastly more than it does that majority of Indians - two-thirds of whom live in rural constituencies.

No wonder then, that Himachal Pradesh is very much in play - albeit unlikely to be won by opposition to BJP, due to the utter lack of an 'opposition to the BJP' even existing in this country - for now.

Read Also
PM Modi attacks Congress in Himachal, says those who claim to be 'Kattar Imaandaar' are most... 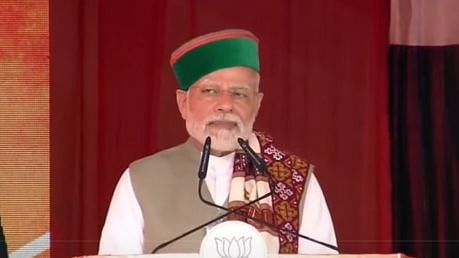