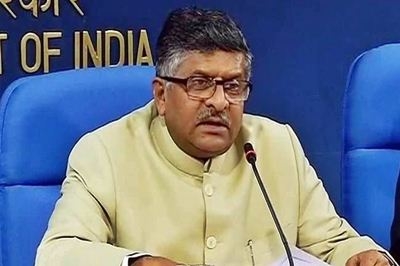 New Delhi: Union Minsiter Ravi Shankar Prasad today questioned eminent writers for returning awards to protest against Kannada author Kalburgi’s murder and Dadri lynching, telling them that such voices were “not heard” after incidents like Emergency and Muzaffarnagar riots.

“…One thing does pain me sometimes. A number of big incidents happened in the country earlier, also but at that time people did not return (awards). “During Emergency, democratic rights including press freedom were violated on such a large scale. But these kinds of voices were not heard then. Such a massive riot happened in Muzaffarangar one and half years back and the way the (state) government (of Samajwadi Party) worked there was in an enitrely discriminatory manner. At that time also such protest was not seen,” Prasad told reporters at the Cabinet briefing.

He however asserted that “we honour the scholars but will like to tell them very politely that if they get award, they have got it on the basis of their ability and knowledge on which everyone takes pride.” The Union Minister, however, refused to take further quesions syaing he does not intend to enter into a debate on the issue at this podium. “I would not like to say anything on it. Cutlure Minister (Mahesh Sharma) has already spoken on it,” he said. Asked about the Opposition criticism of the government on Dadri incident, Prasad sid that both the Prime Minister and BJP chief Amit Shah have spoken over the issue.

“Even after that some people do not desist from criticism. What can we do? The primary responsibility for Dadri incident was on Uttar Pradesh government. Their initial response was also not good. “They should have taken action. We condemn it. Action should be taken against those involved in it,” he said. Prasad’s remarks comes after eminent author Shashi Deshpande said that Prime Minister Narendra Modi’s comment on the Dadri lynching incident was “far too weak.”

The eminent author, who had resigned from the general council of the Sahitya Akademi expressing “disappointment” over PM’s silence on Kannada author Kalburgi’s murder, said that Modi has used a very weak word, “unfortunate”, to term the lynching incident. At least 27 writers, poets, playwrights and translators have so far returned their Sahitya Akademi award with Punjabi writer Dalip Kaur Tiwana handing over her Padma Shri award against the “rising intolerance” in the country.