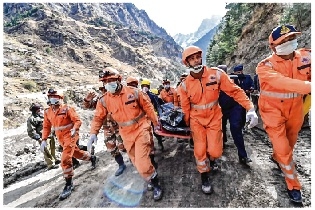 NDRF personnel carry the body of a victim who died near Raini village in Chamoli district of Uttarakhand on Tuesday. | —PTI 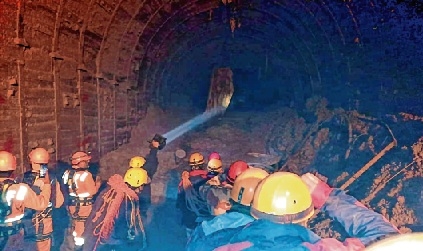 The death toll in the Uttarakhand disaster rose to 32 with 6 more bodies being recovered, officials said on Tuesday as multiple agencies raced against time to reach about 30 workers trapped inside a tunnel at a power project site and 174 people remained missing.

About 600 rescue workers are involved in the operation, 2 days after the sudden flood in the Alaknanda river system in Chamoli that was possibly triggered by an avalanche or glacier burst.

In Parliament, Union Home Minister Amit Shah said the Centre is working in close coordination with the Uttarakhand government.

"Rescue operation to evacuate these people is going on a war-footing and all-out efforts are being made for searching missing persons,” he said.

The State Emergency Operation Centre said 6 bodies were found on Tuesday, taking the death toll to 32, and 174 people are still missing.

With the hours ticking by, fears escalated about those missing since the disaster struck on Sunday morning, according to officials.

The missing people include those working at NTPC’s 480 MW Tapovan-Vishnugad project and the 13.2 MW Rishiganga Hydel Project and villagers whose homes nearby were washed away.

Some family members of the missing workers are camping at Tapovan, waiting for some news about them.

Teams of the Army, ITBP, NDRF and SDRF coordinated efforts to rescue 25-35 people who were working in a tunnel at the Tapovan-Vishnugad project when the waters came rushing in.

"Clearing of debris and slush continued the whole night. About 120 metres of the tunnel entrance stretch is now clear," ITBP spokesperson Vivek Kumar Pandey said in Delhi. "The height of the accumulated slush has reduced more. ITBP personnel are waiting to enter as soon as any movement deep inside the tunnel is possible," he said.

Joshimath: Several senior citizens in Paing village in Chamoli lost connection with other members of their families who had gone to the city when the bridge connecting the city with the village was washed away due to the flash floods after the glacier burst. Most women from Paing village go for the Polio vaccination drive every day to Joshimath and senior citizens are left at home. The floods have separated almost all families. The last communication between them was 2 days back. Due to the absence of electricity, the locals are facing difficulty in charging their phones which has added to their troubles. According to the locals, there are almost 70-80 senior citizens stuck in the village which is situated on the other side of the bridge and road that has been swept off, leaving women at the side of the Tapovan tunnel where rescue operations are on.

Srawan Shukla / Lucknow: CM Yogi Adityanath on Tuesday rushed a 3-member ministerial team to Chamoli to speed up efforts in tracing 53 people from UP, still missing. The CM has announced an ex gratia of Rs2 lakh to the families the dead from the state. The victims’ cremation will be arranged by the state government, which has issued directives for free medical treatment of the injured in flash floods. The UP govt has formed a panel, headed by additional chief secy Awanish Kumar Awasthi, to coordinate with the hill state administration over ongoing rescue operation and offer help to their counterpart.