While the BJP is leading in most districts in the Panchayat elections, reports coming in from Varanasi and Ayodhya -- the two districts crucial for the party in Uttar Pradesh -- are not encouraging.

According to a report by India Today, Samajwadi Party claimed it had won more than half of the posts in district panchayats. The party also alleged that the administration was not handing over certificates to its candidates.

Though BJP is reported to be leading in the overall tally, the party faced a set back in Ayodhya and Varanasi. According to the report, the BJP has won just six of 40 district panchayat seats in Ayodhya. While the Samajwadi Party won 24 seats and Bahujan Samaj Party (BSP) won five. 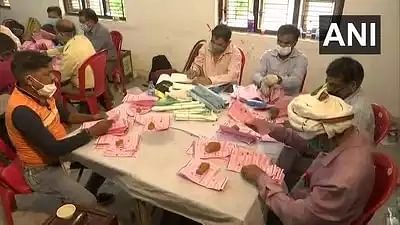 Meanwhile, there are 40 Zila Panchayat seats in Varanasi and the Samajwadi Party has won 15 seats, and the BJP only seven seats.

Varanasi and Ayodhya have been the focal point of Chief Minister Yogi Adityanath's development policies and the two cities are being developed as the hub of religious tourism.

Results for over 3.27 lakh panchayat posts out of the nearly six lakh for which polling took place across the state have been declared. In addition, over 3.19 lakh candidates were declared elected unopposed, before the counting began Sunday at 826 centres began on Sunday.

The ruling Bharatiya Janata Party and the Aam Aadmi Party have claimed major wins in the elections which were held in four phases last month, amid a surge in coronavirus cases.

The state election commission said apart from those who faced no contest, 2,32,612 village panchayats members, 38,317 village pradhans, 55,926 kshetra panchayat members and 181 zila panchayat members have so far been declared elected. Nearly 13 lakh candidates took part in the panchayat elections held on April 15, 19, 26 and 29.