Police fire teargas shells after a group of Pandits tries to march towards Srinagar airport.

Constable Reyaz Ahmad Thokar was killed in Gudoora Village, Kakapora Block, this morning, a police spokesman said.The constable was taken to a local hospital where he succumbed to his injuries, Inspector General of Police (Kashmir Zone) Vijay Kumar said.This is the second killing in the Valley in the last 24 hours. On Thursday evening, Rahul Bhat, a Kashmiri Pandit who worked at the tehsil office at Chadoora in Budgam District, was killed at the premises.Following Bhat’s killing, protests broke out in several parts of Jammu and Kashmir. Police fired teargas shells after a group of Pandits tried to march towards Srinagar airport.

At several areas, members of the community left their transit camps, blocked roads and raised slogans against the central government and the BJP, saying they had failed them.

More than 4,000 Pandits are living in transit camps in various parts of Kashmir after they were given government jobs under a special employment package launched in 2010.

Wanted to visit Budgam to express my solidarity with Kashmiri pandits protesting against GOIs failure to protect them. Have been put under house arrest as the fact that Kashmiri muslims & pandits empathise with each other’s pain doesn’t fit into their vicious communal narrative.

Former CM Omar Abdullah termed the police’s actions “shameful”. He also took on the Manoj Sinha-led administration over its claims of normalcy. “Tourism is not normalcy, it’s a barometer of economic activity. Normalcy is the absence of fear, the absence of terror, the inability of militants to strike at will, the presence of democratic rule and by any yardstick you choose to use, Kashmir is far from normal today,” he said.

It’s shameful that legitimate & justified protests are met with a heavy-handed response. This is not new for the people of Kashmir because when all the administration has is a hammer every problem resembles a nail. If the LG’s Govt can’t protect KPs they have a right to protest. https://t.co/is9q1FwUbG 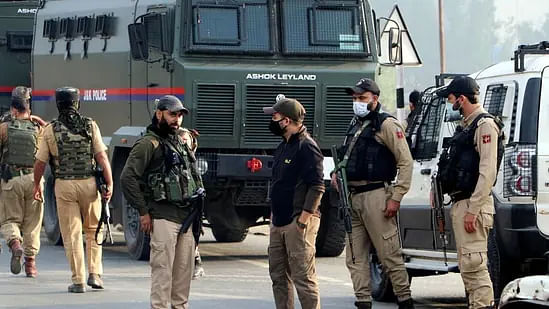