In a video apparently of a speech made to his supporters, Mishra dismissed allegations levelled against him.

Facing demand for his resignation over the alleged involvement of his son in the Lakhimpur Kheri violence, Union Minister Ajay Kumar Mishra said he is not answerable to people like Rakesh Tikait and called the farmer leader "do kaudi ka aadmi" or a second rate person. In a video apparently of a speech made to his supporters, Mishra dismissed allegations levelled against him.

"Suppose I am going to Lucknow in a car which is at a good speed, dogs bark on the road or chase the car. It's their nature, I will not say anything about that as we do not have this nature. When things come to the fore, I will give answer to everyone. I am very confident because of your support," Mishra, who is the Minister of State for Home, said.

On October 3 last year, eight people, including four farmers and a journalist, were killed in the violence at Tikunia village here during a farmer protest against the visit of UP Deputy Chief Minister Keshav Prasad Maurya to Mishra's village in Lakhimpur Kheri district.

In this case, Mishra's son Ashish Mishra has been arrested as the main accused.

"People keep raising questions. There are also 'bevakoof patrakaar' (stupid journalists) who have no relationship with journalism and want to create confusion by such 'ulti-seedhi baat' (unfounded things)," he said.

"I know Rakesh Tikait very well, he is a 'do kaudi ka aadmi' (second rate person). He fought election twice and lost the deposit. If this kind of a man opposes anyone, it is of no value and so I do not answer to such people as it is of no relevance," Mishra said.

Led by Tikait, the Samyukt Kisan Morcha (SKM) had staged a 75-hour long dharna in Lakhimpur last week to press for various demands, including sacking of Mishra.

"He (Tikait) is doing politics in this manner and running his livelihood. They will be given a reply at the right time," Mishra is heard telling BJP workers in the video apparently in his Kheri constituency.

Tikait said it was natural for him to be angry when his son is in jail for the past one year.

The Union minister, known for making controversial statements, also appeared to be giving a clarification in the speech over various allegations levelled against him.

"I have not done anything wrong in my life. I am fighting for the right thing. I have not even done .01 per cent wrong. Anyone can come forward and show otherwise. Truth is never defeated," he said.

"No one in the world will be able to disappoint you. No matter how many Rakesh Tikait come," he is heard assuring his supporters to shouts of "zindabad".

"I have to say only this -- 'mujhko tum barkha na samjho aag ka dariya hoon mai,yeh to majboori hai meri apney aap mein jalta hoon main,'" he said amid shouts of supporters in his favour." Replying to his insinuation, Tikait alleged that a "goonda raj" has been unleashed by Mishra in Lakhimpur and said they would soon launch a "mukti abhiyan" to free the place from Mishra's reign of terror.

"This time we stayed for three days, next time we will stay there (Lakhimpur) for 13 days to end the 'goonda raj' of the minister," the BKU leader was heard saying in a video.

The farmer leader said such threatening comments of the MOS could affect the probe into the Lakhimpur Kheri violence.

"The court and the police should do its work. He (Mishra) shall be externed from the district or the state so that the probe is not affected in the incident," he said.

Tikait said the Lakhimpur Kheri incident would be a prominent issue wherever there is a farmers' agitation in the country. 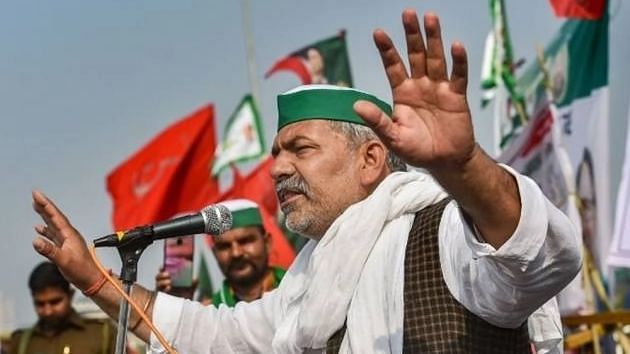