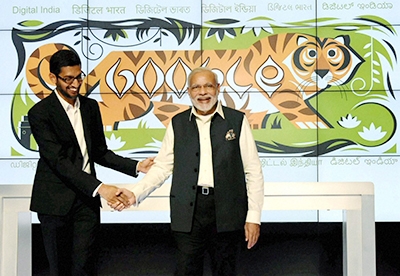 San Jose : Lamenting that the UN has been unable to define terrorism in 70 years, Prime Minister Narendra Modi on Monday said if it takes so long in doing so, then how many years will be required to deal with the menace.

“We put pressure on the UN. The UN is celebrating its 70th anniversary but till now it has not been able to arrive at a definition for terrorism. If defining it takes so much time, then how many years will it take to to tackle terrorism,” Modi said in his speech at the SAP Centre here.

It is the UN’s responsibility to spell out clearly who it considers a terrorist so that the international community can chart out its path to usher in peace, he said.

“At a time when we are observing the 70th anniversary of the UN, it is the world body’s responsibility to come out in clear terms who it considers a terrorist and who is on the side of humanity. Once it has to be made clear so that the world can decide which path it should follow and only then peace will prevail,” Modi said.

The Prime Minister said he was hopeful that the UN will not be able to further delay a decision on such a serious issue.

Observing that India has been a victim of terrorism for the past 40 years, Modi said the West and many other countries woke up to the menace of terrorism only after they faced bomb blasts or terror attacks.

“We cannot let 21st century to be stained with terrorism,” Modi said, adding, “the world has to stand united in tackling terrorism.”

Noting that India is the land of Mahatma Gandhi and Gautam Buddha who preached peace and non-violence to the world, he said, “the world has to realise that terrorism can hit anyone at anyplace, and it is the world’s responsibility to recognise it and unite against terrorism.” Indian diaspora and several top American lawmakers were present on the occasion.

San Jose : Google will collaborate with Indian Railways to provide wi-fi services at 500 stations by next year, Prime Minister Narendra Modi announced on Monday as he visited the headquarters of the search engine giant here.

Modi, who took a tour of the Google campus seeing the latest products and forward-looking researches, was given a presentation of Google Earth in which the ghats of his Lok Sabha constituency Varanasi were shown.     He appreciated and encouraged Google to develop Apps which could benefit the common man as he participated in Hackathon under which its employees sat for 15 hours straight to devise such Apps for use in India. Making brief remarks to the Google employees, most of whom are Indians, Modi announced that “Indian Railways and Google will collaborate to provide wi-fi at 500 railway stations in India.”

Earlier, India-born Google CEO Sundar Pichai said the search engine giant will provide high speed internet services at 100 railway stations in India initially and then expand it by 400 more by next year. Recalling his young days when he used to travel by train from Chennai to Kharagpur, Pichai noted that 25 million people daily ride the Indian Railways which has 7500 stations. He also pointed out that the lenght of Indian Railways is twice the distance between Earth and Moon. Modi pointed out that the network of Indian Rlys is equivalent to a country in Europe, reports PTI. 43-year-old alumunus of IIT-Kharagpur, Pichai said the wi-fi services will be provided to support Modi’s ‘Digital India’ campaign.