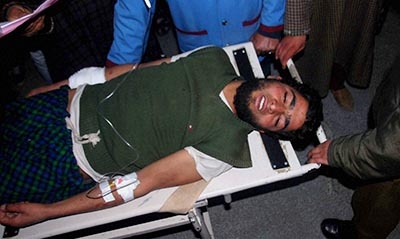 Srinagar: A civilian who was injured during an encounter at Kakpora Pulwama being treated at SMHS Hospitalin Srinagar on Sunday. PTI Photo (PTI2_14_2016_000144B) |

Srinagar : Two youths, including a girl, were killed on Sunday in firing allegedly by security forces on a crowd that was holding a protest over an encounter in Pulwama district of south Kashmir in which an unidentified militant was gunned down. Three persons were also injured in the firing, police said. The two youths killed were identified as Danish and Shahista, a police official said, adding that a crowd of protesters started pelting stones at security forces at Lillhar in the Kakapora area near the encounter site.