Troops of India & China to disengage from Gogra

In the 12th round of talks between India and China, both countries have agreed to disengage troops from the patrolling point 17A, one of the friction points between the two countries in the eastern Ladakh region.

During the 12th round of talks, there was an agreement between both sides to disengage from PP-17A also known as Gogra, sources said in New Delhi. The last disengagement agreed and acted upon both sides was in February this year when they disengaged from the banks of Pangong Lake.

The actions on the ground would be confirmed and are expected to be followed up soon, they said.

The two sides would continue their talks to resolve the issue on friction points including the PP-15 (Hot Springs) and the Depsang plains.

The talks were held on July 31 in Chushul-Moldo on the Line of Actual Control (LAC) after which they issued a joint statement on August 2.

As per the statement, “The two sides had a candid and in-depth exchange of views on resolution of remaining areas related to disengagement along the Line of Actual Control in the Western Sector of India-China border areas. The two sides noted that this round of meeting was constructive, which further enhanced mutual understanding.”

It said both sides agreed to resolve the remaining issues in an expeditious manner in accordance with the existing agreements and protocols and maintain the momentum of dialogue and negotiations.

“The two sides also agreed that in the interim they will continue their effective efforts in ensuring stability along the LAC in the Western Sector and jointly maintain peace and tranquillity,” the statement added.

This round of meetings was held following the meeting of the Foreign Ministers of India and the People’s Republic of China (PRC) on July 14 in Dushanbe, and the 22nd meeting of the Working Mechanism for Consultation and Coordination on India-China Border Affairs (WMCC) which was held on June 25.

Agartala: Outlawed extremists gunned down two Border Security Force (BSF) personnel including a sub-inspector rank official and looted their sophisticated arms in Tripura on Tuesday, police said. A police official in Agartala said during patrolling, the suspected National Liberation Front of Tripura (NLFT) militants attacked the BSF troopers at Manikpur tribal village leading to a fierce encounter in which two para-military personnel were killed on the spot.

The martyred BSF men include sub-inspector Bhuru Singh and constable Raj Kumar. The tribal guerrillas have taken away two sophisticated arms of the slain BSF jawans before they fled from the area, which is close to India-Bangladesh border under Dhalai district in northern Tripura. BSF official said as per the blood strains at the spot, militants have reportedly sustained some injuries. "Both our martyrs have fought valiantly before succumbing to their injuries. Massive search operation has been launched in the area to nab the militants,” the BSF official said. 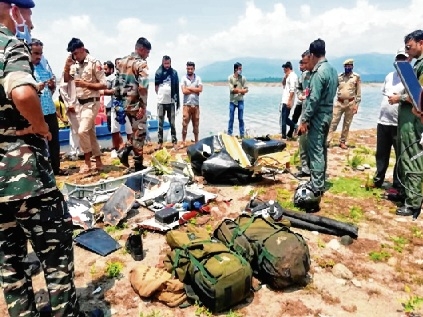 Kathua/Chandigarh: An Army helicopter crashed into the Ranjit Sagar Dam lake in J&K’s Kathua on Tuesday, prompting the authorities to launch a search operation to trace the missing.

The dam is 30 km away from Pathankot in Punjab and the incident took place at 10.30 pm. Kathua SSP RC Kotwal said the forces and boats were mobilised for the operation, after which some pieces of chopper were found, confirming it to be an Army helicopter. “We cannot say how many people were in the chopper and what happened to them,” he said.

Eyewitnesses said the chopper was flying over the lake and suddenly it came down and crashed into the water with a loud thud.

According to reports, two people were on board. During the search operation, a helmet, two big size bags, one shoe and some helicopter parts were recovered.

The Swarnim Vijay Victory Flame, commemorating 50 years of India’s win over Pakistan in the 1971 Indo-Pak war, on Tuesday reached the frozen frontiers of Siachen Glacier — the world’s highest battlefield, a defence spokesperson said. “The victory flame was received with full military honours at Bana Post, located at a height of 22,000 feet on the Siachen Glacier,” Srinagar-based PRO Defence Col Emron Musavi said.