"After the Supreme Court verdict, there were cases of triple talaq. This bill is not for any worship, religion or community but it is for gender justice, equality and dignity. Today, humanity has won," he said.
ANI 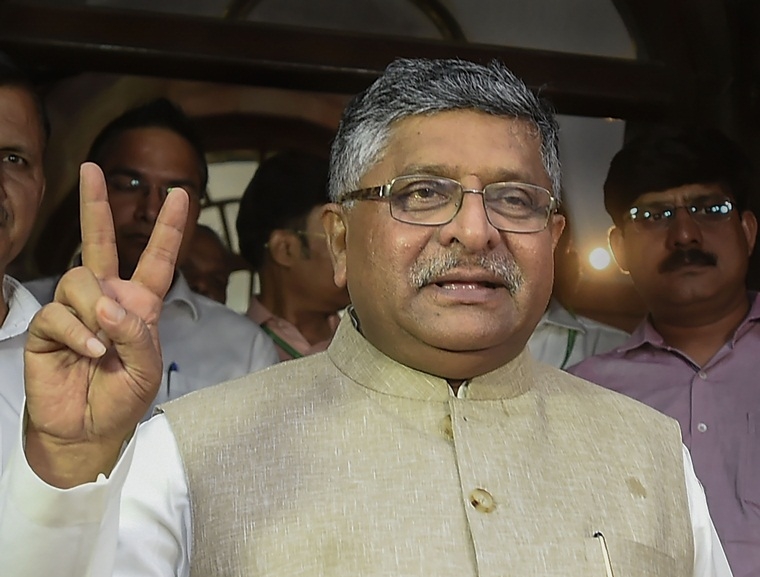 New Delhi: Union Law Minister Ravi Shankar Prasad on Tuesday said the Muslim Women (Protection of Rights on Marriage) Bill, 2019 stands for gender justice, equality and dignity, and is not about religion.

"This is a historic day that Rajya Sabha passed the triple talaq bill and criminalised the practice of triple talaq. Some people thought that they will block the bill in Rajya Sabha but it was passed. I thank Prime Minister Narendra Modi who said that the government should stand with the victims of triple talaq," Prasad told ANI. "After the Supreme Court verdict, there were cases of triple talaq. This bill is not for any worship, religion or community but it is for gender justice, equality and dignity. Today, humanity has won," he said.

BJP working president JP Nadda said the bill will free Muslim women from the curse of triple talaq. "Heartiest greetings to PM Narendra Modi and all Rajya Sabha MPs for passing Muslim Women (Protection of Rights on Marriage) Bill, 2019 in the Rajya Sabha and freeing Muslim women off the curse of triple talaq," he tweeted. "This Bill is one which ensures that the self respect of Muslim women stay intact. This reflects the motto of 'sabka saath sabka vikas' of Modi government," Nadda added.

Uttar Pradesh Chief Minister Yogi Adityanath said that the bill is a symbol of women's dignity. "Unfortunately, people who used to speak for women empowerment opposed the Bill in Lok Sabha and Rajya Sabha, a Bill which is a symbol of women dignity. Congress and their allies, SP and BSP in the state, have been exposed," Adityanath told ANI.

The government scored a major victory in the Rajya Sabha on the back of cracks in the opposition when the House passed the triple talaq bill after rejecting the Opposition's demand to refer it to the select committee and to remove the criminality clause which provides for jailing the husband for three years for pronouncing triple talaq to his wife. The Bill was passed with 99 members in its favour while 84 members voted against it in the final division. In the division on referring it to select committee, the government got 100 votes while 84 voted against.

The government, which does not have a majority in the Upper House, still managed to have a smooth sailing for the contentious bill because parties like AIADMK, which has 11 members and JDU, with six, walked out after recording their opposition to the bill. MPs belonging to parties like YSRCP and TRS reportedly abstained from voting while NCP leaders Sharad Pawar and Praful Patel and some Congress members were absent.The Bill has already been passed by the Lok Sabha.

The motion to refer the Bill to a select committee was negated with 84 members voting in its favour while 100 voted against it. The amendments moved by several opposition members were also defeated either by voting or by voice vote. The Muslim Women (Protection of Rights on Marriage), Bill, 2019 criminalises instant triple talaq among Muslims and attracts a jail term of three years for the husband.