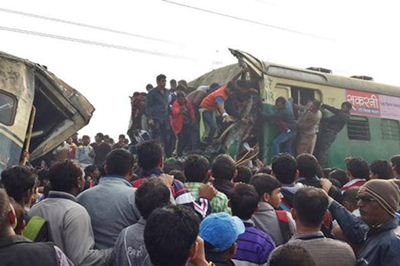 Palwal (Haryana): A local train rammed into the Lokmanya Tilak Haridwar Express amid foggy conditions near here today, leaving the driver of one of the trains dead and two others injured.

While the driver of the Palwal-Ghaziabad EMU was killed, the assistant driver of the train and guard of the express train were injured in the mishap, Northern Railway spokesperson Neeraj Sharma said.

“There was fog in the morning and the EMU driver probably could not see the signal and hit the train from behind,” he said. Sharma said further details were awaited.

The mishap hit road traffic on the route, disrupting the movement of about 15 trains.

General Manager of Northern Railway AK Puthia along with senior railway officials have rushed to the spot and are monitoring the situation.

The railway spokesperson said passengers of both the trains were safe.