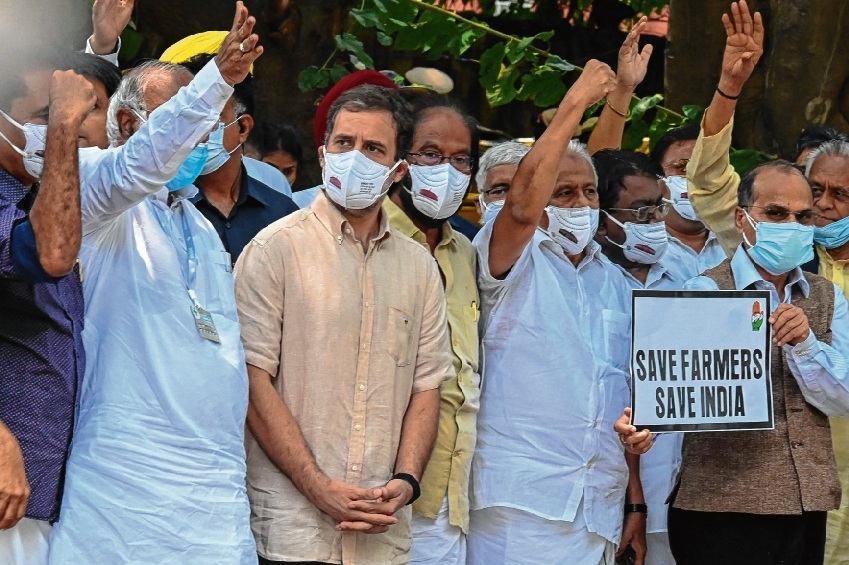 The monsoon session of Parliament remained blocked and adjourned on Friday for the third week, amid heavy sloganeering by the Opposition parties disrupting both the Houses on a daily basis until the government yields for a discussion the snooping of mobile phones using Pegasus spyware.

Only a week is left for the session to end on August 13, but there are no signs of any agreement to end the disruption of the two Houses that continued to pass a score of official bills without discussions or with a semblance of discussion of 10-15 minutes amid pandemonium.

Leaders of 14 Opposition parties assembled in the morning in the chamber of Rajya Sabha Opposition leader Mallikarjun Kharge in the Parliament House, with Rahul Gandhi also in attendance. They decided to give notices once again for discussions on Pegasus, farmers’ issues and price rise. They deplored the Rajya Sabha chairman declaring 3 days ago to allow a discussi­on on the farmers’ issues but not listing it on the agenda.

With Parliament adjourned to meet again on Monday, the Opposition leaders walked to Jantar Mantar, half a km away from the Parliament House, to join the farmers protesting there and holding a ‘Farmers Sansad’ for the past 12 days.

Congress leader Rahul Gandhi and Mallikarjun Kharge, Shiv Sena’s Sanjay Raut, DMK’s T Siva and RJD’s Manoj Jha were among others who were seen holding placards of “Save Farmers, Save India” in support of farmers, raising slogans and protesting alongside them. They also watched for an hour the farmers’ own Parliament, without entering the arena since the Kisan Ekta Morcha is firm in not allowing its forum used by any political party.

Rahul Gandhi and others could be seen raising slogans against “Pegasus” and the “farm laws” even while walking up to the Jantar Mantar however, many others, including Ambika Soni and Gaurav Gogoi, took a bus from the party’s office at Rakabganj Gurdwara road to reach the place.

Lok Sabha was adjourned for the day shortly after noon on Friday after passage of two bills, including the one which proposes to end a controversial retrospective tax policy, amid protests by Opposition members over Pegasus and other issues.

As the House convened for the day at 11am, Speaker Om Birla took up the Question Hour. However, the members resorted to sloganeering over Pegasus snooping controversy and farm laws. As the protests continued, the Spea­ker urged the agitating members to go back to their seats.

The proceedings lasted 15 minutes after which Birla adjourned the House till noon.

When the House resumed at noon, Rajendra Agrawal, who was in the chair, allowed discussions on ‘The Taxation Laws (Amendment) Bill, 2021’, which proposed amen­d­ments to the Income Tax and Finance Act 2012 to make it clear that no tax demand will be raised for any indirect transfer of Indian assets if the transaction was undertaken prior to May 28, 2012.

After a brief statement by Finance Minister Nirmala Sitharaman and clause-wise consideration of the bill, it was passed by voice vote.

Similarly, another bill ‘The Central Universities (Amendment) Bill, 2021’, to set up a central university in Ladakh was passed by the House following a brief statement by Education Minister Dharmendra Pradhan.

After the two bills were passed, the chair adjourned the House for the day.

Lok Sabha will now resume on Monday after the weekend break.

-- Congress refers to SC's observation on Pegasus in Lok Sabha

-- 83 Delta plus cases reported in India till Aug 4: Govt

After the Trinamool delegates met the protesting farmers at Jantar Mantar ahead of other opposition leaders, BJP didn’t leave the opportunity to mali­gn the ‘Unity’ of the opposition.

West Bengal BJP chief Dilip Ghosh said there is no unity among the opposition parties and it is just a ‘wave’ to be in the headlines. “First, the all the farmers are not real and the protest is fake just to malign BJP. Moreover, even before the start of the unity against BJP, the unity seems to have broken and the rest of the opposition still holding hands will leave each other soon,” said Ghosh. However, TMC RS MP Sukhen­du Sekhar Ray said TMC had planned to visit farm­ers. So, RS MP Dola Sen, Pra­s­un Baner­jee, Aparupa and ot­h­ers went there alone. —Aritra Singha