The world’s most powerful leader not immune to car troubles 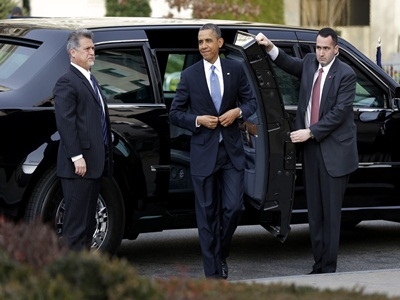 New Delhi: The ‘Beast’, the breathtaking armoured limousine in which the US President Barack Obama and US First Lady Michelle arrived for India’s Republic Day parade on January 26, gave the Americans a few nervous moments, soon after the pomp and show ended.

The breathtaking black beauty, the cynosure of all eyes about which much was written about by the Indian media days before the US President arrived, did not quite live up to its grandeur as one noticed a smartly dressed American lady struggling to open the car for the visiting American President. The door just refused to open in full public view even as the determined lady tried two more times but finally gave up without fuss. The humble President appeared equally unfazed and lost no time in getting into his trusted car from the other side.

Surely, the best and the most expensive cars in the world can let down the royalty and world leaders. The Beast’s door getting jammed reminded me of a news report from January 2013 when Queen Elizabeth’s Bentley failed to start after a Church service at Sandringham. The Telegraph reported that the car’s V8 6.75 litre engine spluttered into life at the seventh attempt.