Tension in Sringeri as ‘flag’ found atop statue 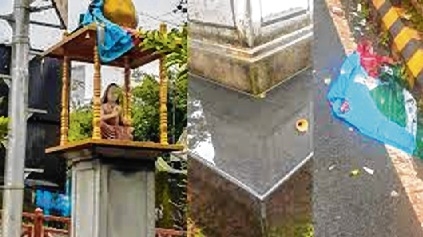 Tension prevailed in Chikkamagaluru town when a flag was found atop the statue of Adi Shankaracharya in the holy town of Sringeri.

The BJP was quick to react and said the flag was that of the Secular Democratic Party of India (SDPI) – the political outfit that sparked the violence in Bengaluru east. The SDPI, however, has denied the charges.

The police on Friday arrested a man named Milind after they examined CCTV footage near the area and saw him throwing the piece of cloth on the statue. Milind was allegedly in an inebriated condition. Udupi-Chikkamagaluru MP Shobha Karandlaje had taken to Twitter Friday saying: "Planting SDPI flag on Sri Shankaracharya's statue in Sringeri & inciting violence. It's high time that Govt led by Sri@BSYBJP recommends central govt to ban this terror outfit. Orgs like SDPI & PFI are a threat to mankind, national security & for a harmonious society."

Meanwhile, the city police on Friday arrested 60 more people, including Congress corporator Irshad Begum’s husband Kaleem Pasha, in connection with the violence in east Bengaluru that resulted in three deaths in police firing and over 150, including policemen, injured.