New Delhi: A contingent of 99 ITBP commandos along with 3 sniffer dogs landed at the Hindon IAF base on Tuesday onboard a military evacuation flight from Taliban-captured Afghanistan, officials said. The commandos also brought back their personal weapons and belongings and will now undergo a week-long Covid-19 quarantine at a Indo-Tibetan Border Police facility in Delhi, they said.

“With this, our complete contingent deployed for securing the Embassy in Kabul, its 4 consulates in Afgh­a­ni­stan and diplomats have returned. The commandos ca­me along with the Embassy staffers along with other Indian nationals,” ITBP spokes­man Vivek Kumar Pandey said. After landing at Hindon, ITBP contingent commander Ravi Kant Gautam said, “It was a challenging operation as we were evacuating our people in a country where there was no reinforcement,” adding, “The govt of India coordinated all the efforts very well and my commandos carried it out nicely on the ground.”

He said his men have not had sleep for the last 3-4 days and they will finally have some good sleep tonight.

The commandos were taken away in brown-coloured ITBP buses from the Hindon airbase to the quarantine facility. A senior officer said the commandos also carried along their personal AK series assault weapons, bullet-proof jackets, helmets, communication gadgets, ammunition and 3 sniffer dogs.

Thirty diplomats including Indian Ambassador to Afghanistan Rudrendra Tandon, 99 ITBP commandos and 21 civilians were onboard the C-17 Globemaster aircraft of the Indian Air Force that took off from the Hamid Karzai International Airport in Kabul this morning and made a halt at the Jamnagar airforce base before touching down at Hindon in Ghaziabad near Delhi in the evening. There were 4 journalists among the 21 civilians, he said.

In Jamnagar, an ITBP official told reporters the situation in Afghanistan was “very dangerous that cannot be described”. There were chances and threats of attack on the convoys, the Embassy premises or Indian diplomats but ITBP “brought them to the airport safely”.

KOLKATA: The international community, particularly the US, has given the Taliban a platform and the recognition it needed to regain power in Afghanistan, says Afghan Women Network executive director Mary Akrami, describing the situation for women in her country as "scary".

While disappointed and despairing at the silence of the global community, Afghans are hopeful India will be a peacemaker and stand by them in the crisis, Akrami added in a phone interview from Kabul. "India should play the role of a good neighbour, a mediator. And they should stand beside the people of Afghanistan. As a woman, as a human being, I will advise the Indian government to play the role of a peacemaker," she said.

"The international community, particularly the US, has given the Taliban a platform, space and the recognition to regain power in Afghanistan. Suddenly, giving this much of a platform to the Taliban was one of the biggest mistakes of the US government. None of the neighbouring countries, nor anybody in the world, have raised any objection to that," Akrami said.

Giving an insight into what's happening on the ground, Akrami said the current situation is "scary for women". There have been several incidents of women stepping outside their homes without a 'mahram' (group of escorts) being beaten on the streets, even if they are going to a health centre.

"Shops are banned from selling goods to women without a 'mahram'. The Taliban have ordered people to feed its fighters, otherwise face punishment."

The Islamic insurgents -- who follow a strict, ultra-orthodox patriarchal code for women -- have given orders to village elders and 'mullahs' to identify girls above age 15 and widows below age 45 to marry their fighters.

"The Taliban have told working women here they cannot go to their offices and listening to music or watching television have been banned.”

"It's not only our fight, it's the fight of the entire world...It's a time when I believe all countries must unite. Why is the UN so quiet with regard to Afghanistan? There are countries like India, Iran who are not supporting the Taliban, but are they still silent”

"I do not understand the reason behind this attitude. If a terrorist group comes and occupies Afghanistan, it is actually not good for our neighbouring countries, nor for the world. We have been suffering for the last 50 years and we do not want our neighbours to suffer like us"

Akrami, a former executive director of the Afghan Wo­men Skills Development Centre (AWSDC), also saw conspiracies behind the sudden rise of the Taliban and held countries such as Yemen, Syria and Sudan apart from Pakistan responsible. 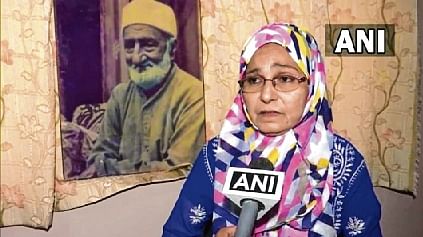 ‘Receiving SOS calls from Pakhtoons across India over safety of kin’

Kolkata: Yasmin Nigar Khan, the Kolkata-based great-granddaughter of “'Frontier Gandhi” Khan Abdul Ghaffar Khan, on Tuesday said she has been receiving SOS calls from Pakhtoons across India, urging her to request the Ministry of External Affairs to ensure the safety of their kin after the Taliban takeover of Afghanistan.

Khan (50), who has been living in central Kolkata for generations, is the president of the All India Pakhtoon Jirga-e-Hind, the apex body of the community in the country. "We are in constant touch with the central and West Bengal governments, but the situation is fluid and very little information is trickling in from Afghanistan. Phone lines are jammed and visuals from Kabul are disturbing. Those living in India are distraught," Khan, who has barely slept in the last two nights, told PTI.

She said the 1,000-odd Pakhtoons in the state and lakhs in across India for generations have no chance of return­ing to their native place but almost everyone has relatives in Afgha­nistan or north-western Pakistan. “They regularly spoke with their relatives in Afghanistan even a few months back but are not able to contact them now. Whatever little information they are getting is through those living in Pakistan. Many have been killed in the aggression of Taliban, a monstrous force with no respect for liberty, dignity and freedom of women,” Khan said.

Her great-grandfather had set up a school for girls in present-day Khyber Pakhtunkhwa province of Pakistan in 1921. “The school has been closed now. I don’t know what will happen to it later,” she said.

Not a worry for India: Ex-diplomat

The Taliban capturing Afghanistan is not a cause for worry for India, an ex-Diplomat said on Tuesday. The former Indian Ambassador to Saudi Arabia, Oman and the UAE, Talmiz Ahmad also argued that Delhi has no role in Afghanistan currently, and dismissed suggestions that India should engage with the Taliban. The ex-diplomat has termed it as "absolute rubbish" some people expressing the view that India will be "jeopardised" if the Taliban gains total control of Afghanistan. "The Taliban is a national movement and they want to control Afghanistan but they have no interest outside Afghanistan," Ahmad said while speaking to news agency PTI.

He said it is Pakistan, which maintains very tight control over the mo­ve­ment of extremists into India for more than 30 years, and continues to do so. “I don’t see that situation changing only because the Taliban are in control in Afghanistan,” Ahmad said. Stating Al Qaeda and Islamic State (IS) have “no role” in India, he said Indian Muslims are not radicalised for 30 years by the “transnational movements”.

Every possible effort should be made to ensure the safety and dignity of children and women in Afghanistan. All concerned parties, in and outside Afghanistan, must prioritise the well-being and future of children in the process of stability and peace. —Kailash Satyarthi, Nobel laureate

Afghan students studying in educational institutions in Punjab are worried about their families back home after the fall of Kabul to the Taliban. ”We have been having sleepless nights for the last several days. Our families, though safe so far, are shaken and afraid of the turn of events taking place in the country,” Noor Ali Noori, an Afghan student studying at Punjab Agricultural University in Ludhiana, said on Tuesday.

Various IITs are making efforts to help out students currently stuck in Afghanistan following the capture of power by Tali­ban. India on Tuesday announ­ced it will issue an emergency e-visa to Afghan nationals who want to come to the cou­ntry in view of the prevailing situation in Afghanistan after the Taliban captured power there.

The Kerala government on Tuesday said at least 41 Malayalis, including women and children have been stranded in Taliban-controlled Kabul and requested the Centre to make necessary arrangements for their safe evacuation to the home country. In the wake of panic calls from the stranded people received at the Department of NORKA, the state-run welfare agency of non-resident Keralites, the government sent letters to the External Affairs Ministry seeking immediate steps for their repatriation.

A tweet by Peace Party spokesman Shadab Chauhan, ‘congratu­lating’ Taliban on the ‘peaceful’ transfer of power in Afghanistan, has kicked up a storm in the virtual world. As the controversy gathered momentum, Chauhan quietly deleted his tweet and later claimed he had been misconstrued. “Through my tweet I appealed for peace in the neighbourhood and sought support for India’s progress. We want a government that does not differentiate bet­ween humans and works for humanity. I have been misunderstood,” he said. Netizens however continued to react strongly against the tweet and even asked Chauhan to ‘go to Afghanistan’.

Two Kashmiri professors are still stranded in strife-torn Kabul and the Jammu and Kashmir Lt Governor Manoj Sinha said on Tuesday he has taken up the issue of their safe return with the External Affairs Ministry. “Spoke to MoS Foreign Affairs, Shri V Muraleedharan Ji for the immediate evacuation of professors from Kulgam teaching at Bakhtar University in Kabul. He has assured the government is committed to bringing back every citizen safely as soon as possible,” Sinha said on his official Twitter handle.