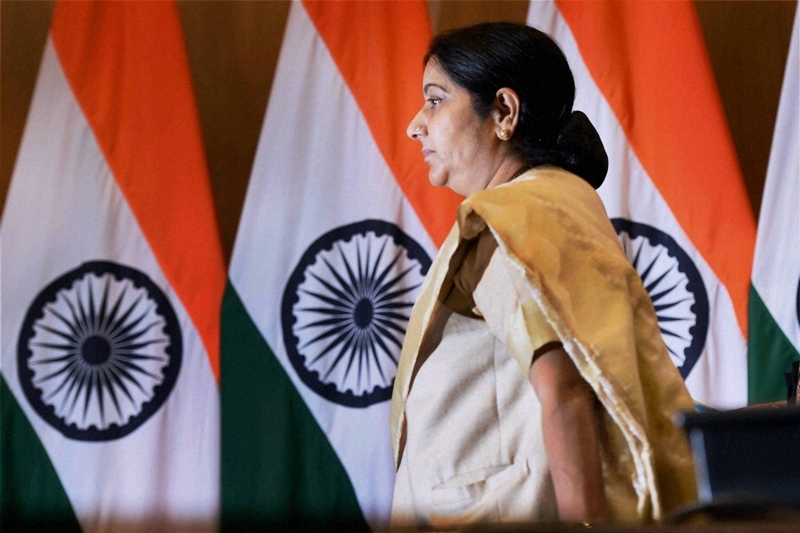 "Even if you are stuck on the Mars, Indian Embassy there will help you," Swaraj famously tweeted in 2017 in response to a post from a person who said he was "stuck on Mars". The tweet generated over 37,000 likes and 15,000 retweets.

During her tenure as the External Affairs Minister, she did ensure that the needy got the due attention and help everywhere. She is also remembered for helping people from Pakistan get medical visas on time.

"We are giving visa for the open heart surgery of your one-year-old daughter Shireen Shiraz in India," she said in a tweet on October 10, 2017 in response to a request from a Pakistani national.

The next day the High Commission of India in Islamabad said, "We have issued visa for the open heart surgery of your daughter in India. Your passports have been dispatched. Wish her a speedy recovery."

This was just one of many instances in which Swaraj's interventions brought reliefs to people in distress.

There are instances when she came to the rescue of people who could not get visa to attend important events abroad.

"@SushmaSwaraj my poor sasuraal wale, mother-in-law and father-in-law have had to postpone the wedding festivities more than once in waiting for my visa to be issued. Please help, this is their only son. They are looking fwd to the festivities," wrote one user in April this year.

Swaraj showed her commitment to help Indians even in this case. "Oh!......... I can help your Sasuraal Walas with Indian Visa so that they don't have to postpone the wedding any further," she said.

"Vikas - I am not happy to read this. The mortal remains of Indian nationals should not wait for want of money. Please send them to India without delay. @HCI_Ottawa," she said in another tweet in response to a newspaper report that repatriation of mortal remains of two persons could not be carried out from Canada for five days due to financial constraints.

Another tweet that won the hearts of netizen was her assurance to a man that language would not come in her way of helping people. As his message in English had grammatical error, one man pointed out that he could have written in Hindi or Punjabi.

"There is no problem. After becoming Foreign Minister, I have learnt to follow English of all accents and grammar," Swaraj said with her characteristic wit.

The passion with which she devoted herself for the wellbeing of people once even led to person to wonder if she could help him with a defective refrigerator. "Brother, I cannot help you in matters of a refrigerator. I am very busy with human beings in distress," she politely replied.

In her last tweet, Swaraj, who died of cardiac arrest at the All India Institute of Medical Sciences on Tuesday night, said she was waiting for the day India scrapped Article 370. "Thank you Prime Minister. Thank you very much. I was waiting to see this day in my lifetime," she had posted.

With over 13 million followers, Swaraj was one of the most popular woman leaders on Twitter.