New Delhi: The Supreme Court on Wednesday ordered release of Alt News co-founder Mohammed Zubair on interim bail in all the cases stemming from UP Police FIRs and directed the jail authorities to release him before 6 PM.

A bench led by Justice DY Chandrachud, which also comprised Justices Surya Kant and A S Bopanna, observed that existence of power of arrest must be pursued sparingly by the police.

The bench was of the view that there is "no justification" for keeping Zubair in continued custody any further. No purpose was also served by depriving him of personal liberty and subjecting him to diverse proceedings when the essence of the allegations stems from Tweets, which also form part of an investigation by Delhi Police in a case in which he has been already granted bail.

It also ordered disbanding of the Special Investigation Team (SIT) formed by the UP Police to probe the FIRs against Zubair and clubbed all the FIRs, holding that the case should be handled by one investigating authority, i.e. the Special Cell of the Delhi Police.

Accepting the alternate prayer of Zubair to club all FIRs in Delhi with interim bail, the court said the direction to transfer all UP FIRs to Delhi Police shall also apply to future FIRs registered on the basis of his tweets and he will be entitled to bail in all such future FIRs.

The top court also gave liberty to Zubair to seek quashing of the FIRs before Delhi High Court.

His lawyer Vrinda Grover pointed out that all FIRs emanate from the same tweets, none of which remotely uses language which is improper or amounts to a criminal offence. She said this is a clear case of "silencing" a fact-checker by invoking criminal action under multiple FIRs.

"In this age of digital age, the job of someone who is debunking false information may draw the ire of others. But the law cannot be weaponised against him....The dormant FIRs are activated the moment I secure bail in any case. Old dormant FIRs get suddenly activated. There is a scenario of encircling me," she said.

Uttar Pradesh Additional Advocate General Garima Prashad insisted that Zubair is not a journalist. "He calls himself a fact-checker. Under the guise of fact checking, he is promoting malicious and provocative content. And he gets paid for the tweets. More malicious the tweets, more payment he gets. He has admitted that he has got over Rs 20 crore," she said.

She submitted that instead of informing the police of illegal speech, Zubair has been taking advantage of speeches and videos which have the potential of creating communal divide and he has been sharing them repeatedly.

Zubair relied on the Bhajan Lal case to argue that where criminal proceedings are mala fide or maliciously instituted to wreck vengeance, they can be quashed.

In the FIR registered at the instance of Sudarshan TV, he was accused of inciting the global Muslims through his tweet in which he accused the TV channel of superimposing the image of a mosque in Medina on the image of the Gaza strip to falsely show that it was being destroyed.

Grover argued that Zubair is merely pointing out as a fact checker that the picture of the mosque used in a graphic of Sudarshan TV is the wrong mosque. Hoping the police will take action against the TV channel, she said prima facie, no offence is made out while the FIRs are lodged by the correspondents of this very channel.

Moreover, she said the offences alleged are not punishable for more than three years and so the 14-day police remand was disproportionate. She said the remand was sought to take me into custody and take me wherever they want to probe the tweets from 2014. Is this not a statutory abuse of the power of investigation?

"There are direct threats to him. There is a bounty announce for his head. He is lodged in Tihar jail nd he is taken back and forth," Grover submitted. 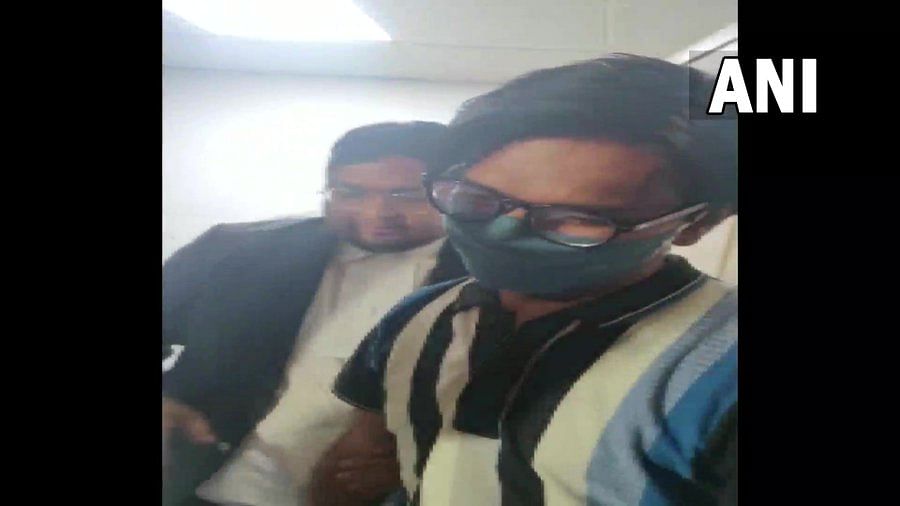