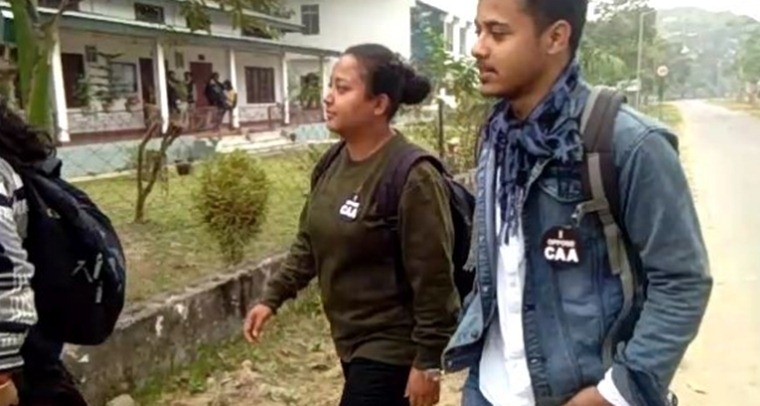 Guwahati: As the schools and colleges in Assam have opened after 12 days on Monday, students at Gauhati University attended classes and appeared for their examinations by wearing black badges in protest against the CAA.

Demanding that the state should be exempted from the Act, students in large numbers have also urged the state government to give proper attention to the mass demand.

Coming down heavily on the Bharatiya Janata Party-led state government, the students also alleged that the state government has failed to realise the sentiments of the people only to gain their vested interests.

Demanding immediate scrapping of the CAA, senior citizens, singers, women led a rally, organised at the behest of All Assam Students Union (AASU), in the heart of city on Monday.

Over 5,000 people, including retired employees and senior citizens, were seen taking part in the protest at the Latasil ground.

Talking to media Lurinjyoti Gogoi, general secretary of AASU, thanked the students for attending classes and writing exams by wearing black badges. “Like the previous Assam Agitation, we won’t miss one precious year of our academic career. This time we will protest and attend classes,” Gogoi said.

Announcing that huge protests rallies will be held in Dibrugarh and Tezpur on Tuesday, the AASU general secretary said, “More than 1 lakh people from different sections of the society will gather at Dibrugarh and Tezpur separately. People are opposing the CAA. This Act has to be scrapped in days to come,” Lurinjyoti Gogoi said.

Meanwhile, commenting on the objectionable social media posts, State minister Himanta Biswa Sarma said that 25 posts were from outside India and three of them were from Dubai.

We are still trying to trace the people behind such posts. Altogether 244 cases were registered and 393 persons have already been held for their alleged involvement in violating law and order in Assam, he said, adding that “the state government is keeping a close eye that a group of people is trying to break the prevailing peace in tea estates of Assam. There has been fake information that Bangladeshi workers will replace the tea garden workers. This is false. The land rights of tea garden are only with its workers.”

“We will take into strict action if someone is trying to provoke the tea garden workers with fake information,” the minister said.