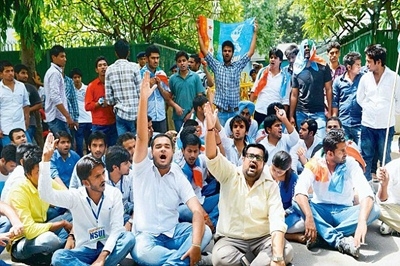 New Delhi: Scores of NSUI workers today held a protest outside HRD Minister Smriti Irani’s official residence here over IIT-Madras de-recognising a students’ body for reportedly criticising Prime Minister Narendra Modi. The protesters from Congress’ students wing raised anti-government slogans and accused the HRD Ministry of being behind the action against the body. They also demanded that the action against the students’ body be revoked. Some of the protesters were detained by police when they tried to break barricades. A senior official of the Madras IIT said the action was taken as the students had “violated” defined guidelines of the institute. As per reports, the student group ‘Ambedkar Periyar Students Circle’ (APSC) was “de-recognised” following an allegation that it was instigating hatred against the Prime Minister.