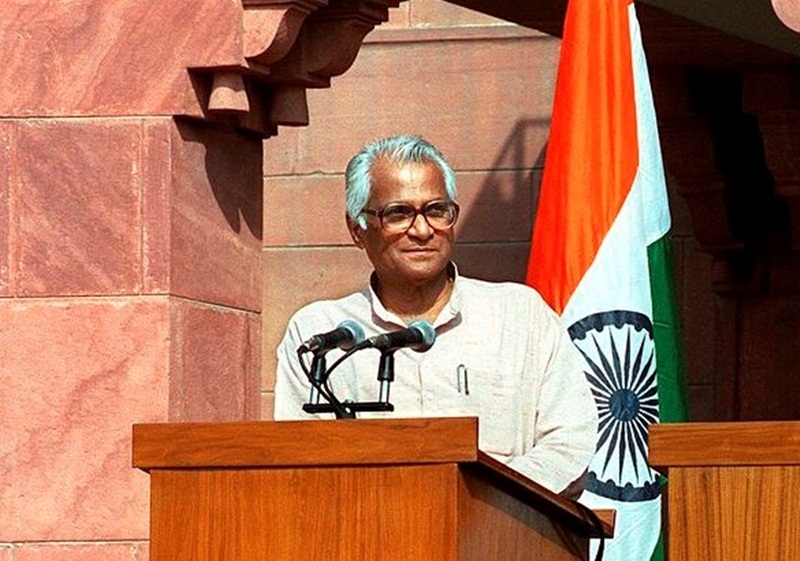 New Delhi: Former defence and railway minister and a socialist leader, George Fernandes, passed away on Tuesday morning at his residence; he was suffering from Alzheimer’s and bed-ridden for the past eight years. He was 88 and survived by his wife Liela Kabir and a New York-based investment banker son. An emergency hero who went underground during 1975-77 to oust then Prime Minister Indira Gandhi and fight for civil liberties severely curtailed by her, Fernandes was arrested in the so-called Baroda dynamite case.

The firebrand late leader was instrumental in setting up the Konkan Railway project, which connected Mumbai with Mangalore, Karnataka, his birthplace. His funeral will be held on Wednesday after his son arrives, said his close aide Jaya Jaitly, former president of Samata Party floated by Fernandes in 1994. It was Jaya Jaitly who served and took care of the veteran leader for many years until his estranged wife Liela Kabir re-joined him and fought court battles to separate him from his brothers and all friends, including Jaitly.

“We are waiting for his son, who lives in the US. His last rights will be performed on Wednesday. His body has been taken to AIIMS for embalming and will be later put at his residence at Panchsheel Park in Saket,” Jaitly told reporters at his residence. Fernandes had burst into national limelight as a leader of taxi unions in Mumbai as also for organising a railway strike in 1974. Ironically, he became the railway minister in 1989 during V P Singh’s National Front coalition government.

Despite being a staunch critic of the RSS, Fernandes surprised all by joining the BJP-led NDA government of Atal Behari Vajpayee as the defence minister. He had come closer to the BJP during his earlier tenure as a minister in the Janata Party government of Morarji Desai. The Jana Sangh, which had merged in the Janata Party, fell out on the issue of dual membership — of JD and the RSS — an issue raised by Fernandes, leading to the establishment of the present-day BJP.

A socialist fighter all his life, Fernandes was the industry minister in the Morarji Desai government in 1977 when he collided with industrialists and slapped foreign exchange violation charges against Coca-Cola and IBM, forcing them to shut down operations and quit India.

He faded away from public memory after losing the 2009 Lok Sabha election and soon fell ill, ending a political career that he had begun with a bang after he defeated Congress veteran S K Patil from Bombay South in the 1967 Lok Sabha elections.

He subsequently represented Muzaffarpur and Nalanda in Bihar and was also a Rajya Sabha member for two years. Tributes poured in for the veteran leader from President Ram Nath Kovind, Prime Minister Modi, Congress President Rahul Gandhi and leaders of all shades. Modi hailed him as a frank and fearless who never deviated from his ideology. BJP MP Dr Subramanian Swamy, who had also gone underground like Fernandes during the Emergency, said.

“Earlier we had ideological differences due to him being a socialist and me favouring the marketbased economy but we were united in opposing TDK (reference to Sonia Gandhi) and residual Nehru family. He was a very good friend in his later years.” Union Home Minister Rajnath Singh said: “Today, we have lost a stalwart of India’s socialist movement.

He devoted his entire life for the welfare and uplift of the poor and marginalised. My heartfelt condolences to his family.” Goa chief minister and former defence minister Manohar Parrikar hailed Fernandes as one of the finest defence ministers of India who “introduced the culture of soldier first into the ministry