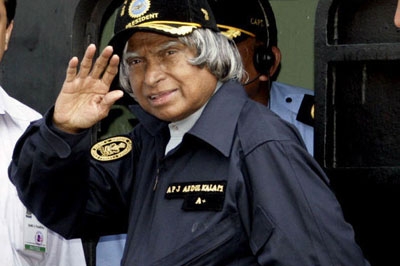 After a ceremonial guard of honour at the airport in the presence of the three service chiefs, Kalam’s mortal remains were brought in an army vehicle to his official residence at 10, Rajaji Marg in central Delhi.

The funeral will be held in Rameswaram, Kalam’s birth place in Tamil Nadu, on July 30 with full military honours. It would be a state funeral and the last rites would be held at 11 AM on Thrusday. The two houses of Parliament were adjourned for two days as a mark of respect to Kalam as political parties gratefully recalled his contributions to the nation.

The union cabinet met in the morning to formally pay tributes to Kalam and passed a resolution which said, “In his passing away the country has lost a visionary scientist, a true nationalist and a great son”.

Kalam was president from 2002-2007 and assumed the highest office when BJP-led National Democratic Alliance was in power. The former president died on Monday evening in a private hospital in Shillong after he collapsed while delivering a lecture on ‘Liveable Planet’ to students of the Indian Institute of Managment, Shillong. Born on October 15, 1931, at Rameswaram in Tamil Nadu, Kalam specialised in aeronautical engineering from Madras Institute of Technology.