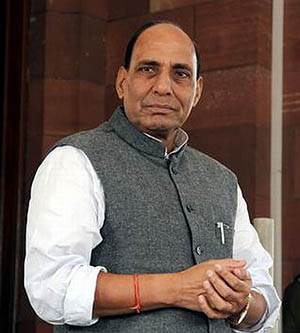 Singh, a Rajput, will be facing Brahmin candidates from SP, BSP and the Congress

Lucknow : The Samajwadi Party on Thursday sprung a surprise by changing its candidate in Lucknow where the Bharatiya Janata Party president Rajnath Singh is contesting the Lok Sabha election. The party replaced present candidate Ashok Bajpai with Abhishek Mishra, a minister of state in the Akhilesh Yadav ministry.

While no reason was given by the party for this sudden change, it is believed that Mishra, SP MLA from Lucknow North, has been found by the party to be better option to put up a fight against Rajnath.

The 37-year-old Mishra, currently a legislator from Lucknow (North), is a former IIM-Ahmedabad professor.

Incidentally, the Congress candidate Rita Bahuguna Joshi, is also an MLA from Lucknow. The BSP candidate Nakul Dubey of BSP – a former minister in the Mayawati regime is also contesting from the same constituency. All the three candidates of major parties in the fray against Rajnath Singh are Brahmins.

The SP decision comes at a time when Rajnath Singh is in Lucknow and has been meeting people from across the city as part of his campaign.

Mishra holds the charge of science and technology and has been considered a part of Akhilesh Yadav’s core group, having played a crucial role in organising the SP campaign in the 2012 Assembly election. He was inducted into the ministry in March 2012 initially as Minister for Protocol, and his portfolio was later changed.

The 37-year old Abhishek Mishra holds a doctorate in Strategy and Marketing from Cambridge University, UK and has been a Professor in Business Policy (Strategy and Innovation) at the Indian Institute of Management (IIM) Ahmedabad. He had secured a stunning victory from Lucknow North constituency in 2012 assembly elections, defeating the BJP candidate Gopal Tandon. The constituency includes the Muslim-dominated old part of the state capital which was considered a BJP stronghold.

Bajpai, on the other hand, is from Hardoi and a veteran leader. He was a minister in the earlier SP government and is known be academically-inclined, holding a doctorate in public administration from Lucknow University.