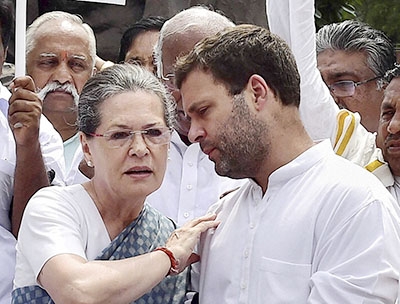 Says Congress’ NE CMs were not taken into confidence

New Delhi : A controversy erupted on Thursday over the recent Naga peace accord, with Congress president Sonia Gandhi taking on the Modi government for ‘insulting’ three north eastern states whose chief ministers belonging to her party were not taken into confidence on the issue.

Already locked in a bitter feud with the government over suspension of 25 of its Lok Sabha members, a combative Sonia opened another front against the Narendra Modi dispensation, charging it with being ‘arrogant’ in not briefing Congress chief ministers of Arunachal Pradesh, Manipur and Assam despite their states being ‘directly affected’ by the pact.

“This Government keeps on saying that everybody has to be taken along and that they will hold consultations with all, will take the views of all chief ministers. Then what happened? Their arrogance is now even clear than before. And it is an insult not only to the chief ministers, but to the people of these states and to the federal structure of our country,” she said.

Talking to reporters in Parliament complex, the Congress president said when she called her party’s chief ministers in the three states, she found they were ‘totally blank’ on the issue. “Nobody has even bothered to brief them, perhaps not in detail, but in a wide sense. After all, our chief ministers are directly affected, be it Manipur, Arunachal Pradesh or Assam. So, what do I take from this? From this I take that this government is arrogant,” she said.

The Modi government had on August 3 signed an accord with the largest insurgent Naga outfit NSCN(IM) after sustained negotiations that dragged on for nearly two decades, describing it as a ‘historic’ step to end the six decade-long conflict in the state.

The terms of the accord, however, are not in the public domain yet and apprehensions have been voiced about NSCN(IM)’s rival Naga outfits like NSCN (Khaplang), which had walked out of the ceasefire agreement with India, rejecting the peace pact, which could thus fail to usher in peace in the restive Nagaland and its adjoining states.

NSCN (Khaplang) had ambushed an army convoy in Manipur’s Chandel district in June this year, killing 18 soldiers and prompting a surgical retaliatory strike along the Myanmar border. There are apprehensions about it mounting more such attacks to nullify the accord. Congress vice president Rahul Gandhi, who was also present, said, “It’s an insult to every single citizen in these three states and it’s an insult to the people of India the way this government does its work.”