Siachen: Talk of withdrawing from Siachen cannot be agenda-driven 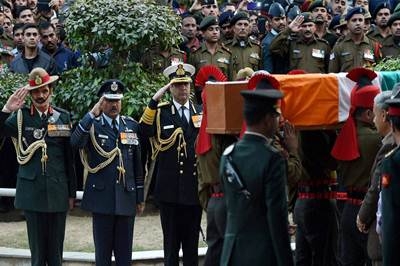 Thirty-two years after Indian troops secured key passes on the north-south running Saltoro Range to deny Pakistan access to the Siachen Glacier, it continues to dominate the headlines.

Tragedy, no stranger to the glaciated region bordering Sinkiang and the Northern Areas under the control of Pakistan, resulted in a 10-man infantry section from 19 Madras, inclusive of a medic from the Army Medical Corps, being buried alive when an ice wall collapsed near Sonam Post at 20,600 ft.

In what had to be a major feat of human endurance, braving the extreme cold and lack of oxygen, rescue teams dug through the 35 feet of ice debris and five days latermiraculously pulled out a survivor, Lance Naik Hanamanthappa Koppad. Despite the collective prayers of the entire nation and the efforts of army doctors, this brave soldier too joined his other nine comrades three days after being rescued and evacuated.

Even as the rescue drama unfolded before the nation, a leading newspaper in the country published an article written by an associate professor from the Jawaharlal Nehru University suggesting that Indian troops deinduct from Siachen and the glacier be declared a peace park.

The article, echoing sentiments expressed in the past, claimed that maintaining troops at Siachen cost the government Rs.5 crore (nearly $735,000) daily and that hundreds of lives had already been lost in holding territory that was of no major consequence.

“I’m all for an open debate on matters that concern our national security. However, these debates need to be informed discussions that look at the entire picture and are not just agenda driven,” said General V.L. Singh, the minister of state for external affairs who is also a former Indian Army chief. “The last time the ‘withdrawal from Siachen’ issue was raised, it was in 2012 at the behest of the PMO. Once these behind-the-scenes machinations were exposed on social media, the UPA had quietly dropped the idea.”

A 12-member Track-II committee had been cobbled together in 2011 with the blessings of then prime minister Manmohan Singh. A former air chief, along with handpicked armoured corps officers (all of them never having served in the region) represented India while on the Pakistan side was a group headed by a former army chief. The two delegations then met in various parts of the globe under the aegis of an Ottawa-based think tank.

“The Americans have always had an interest in the region,” says Lieutenant General Rakesh Loomba, a former head of Military Intelligence. “Even the maps that initially showed the Saltaro range and the Siachen Glacier as being Pakistani territory were issued by the US Air Force.”

The blatant cartographic aggression had resulted in Colonel Narendra ‘Bull’ Kumar leading an Indian Army expedition into the area in 1982 that confirmed the presence of mountaineering groups sent in by Pakistan. Subsequently, Indian troops had secured the key passes on the Saltoro, getting into position just a few hours before Pakistani troops also arrived.

Lieutenant General Prakash Katoch (retd), a Special Forces veteran who commanded the Siachen Brigade during the 1999 Kargil conflict, said: “All this talk of withdrawing from Siachen is pure bunkum! First, Pakistan has zero presence on Siachen, notwithstanding whatever their army keeps telling their own people. Their positions are to the west of the Saltoro Ridge. For years, they have tried to dislodge Indian troops from there, but they have never succeeded. We’ve paid in human lives to secure the border there – it is now the de facto Line of Control with Pakistan while towards the north, we have China that controls the Shaksgam Valley. Why should we pull out? That would amount to shooting ourselves in the foot and a betrayal of all those who have died securing the area.”

While most Indian Army officers dismiss all talk of de-induction from the glacier, Sanjaya Baru, in his book “The Accidental Prime Minister”, touches on the subject, saying a former Indian Army chief, General J.J. Singh, had privately told Manmohan Singh that a withdrawal was doable.

“All this is fanciful talk,” says Gen. V. K. Singh. “The basic question that needs to be asked from those who wish to withdraw – be it (Ajai) Shuklaji and his friends in Trac II or Professor Happymon Jacob from JNU – after de-inducting where do you want your new line of defence to be set up? Do they have any idea what that will entail? Also, what about the rest of the LOC – have these people any idea of the conditions prevailing there? To just mouth off with no idea about the larger picture is extremely dangerous.”

“It would mean fortifying the entire Ladakh range that runs from west to east, preparing defences along the Shyok river. The quantum of troops required would be almost 15 times what we have in Siachen now, plus it would make Leh a frontline town,” says General Katoch who continues to write extensively on the subject.

“If we want to honour the fallen who have sacrificed their lives in Siachen, we need to nip this talk in the bud. We must remember that the gates to India have always been opened from within,” Gen. Katoch adds.